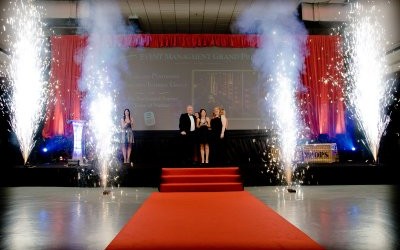 The Enchanted Forest, Scotland’s premier sound and light show, swept the floor at last night’s prestigious Scottish Event Awards, beating off stiff competition from some of Scotland’s finest events to scoop the Event Management Grand Prix, alongside the awards for Best Cultural Event and a commendation for Best Large Event.

The ceremony was held at Edinburgh’s Corn Exchange and saw the event, which was run last year by the not for profit Highland Perthshire Community Interest Company, claim Scotland’s top event title against some of the country’s most well known events and festivals including Bauer Radio Scotland’s “Live on Location”, Edinburgh’s Hogmanay, Glasgow Film Festival, the Hebridean Celtic Festival, Celtic Connections and Piping Live.

Derek Allan, chairman of The Enchanted Forest, who was invited to address the audience at the awards ceremony, commented “This is real recognition of what a community can do when they put their minds to it. It is testimony to the hard work and dedication of the many people in Highland Perthshire who have grasped, with both hands, the organisation of such a major event and have added their own touch of excellence to The Enchanted Forest. I am extremely proud of both the event and our team.”

This year the event moves to a new location at The Explorers Garden in Pitlochry and, true to its Big Tree Country roots, will transform this specimen woodland garden into a son et lumiere journey of discovery for visitors that showcases some of the area’s most celebrated trees.

The show “Transitions” has been designed by Scottish designers Simon Wilkinson (lighting) and R J McConnell (sound) whose combined expertise put on the multi-award winning 2010 event.

Organisers have also taken the decision to extend the event’s run from its traditional 17 nights to 23 nights this year, which opens up the event to a potential 25,000 visitors.