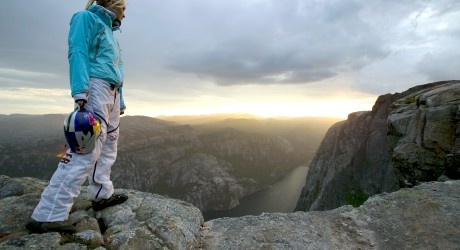 The best of the best in the fields of climbing, mountaineering, round the world expeditions, base jumping and mountain photography are among those who will be flocking to the Scottish capital for the 9th Edinburgh Mountain Film Festival (EMFF) from Thursday 6 to Sunday 9 October 2011.

This year's diverse and packed programme of mountain films, lectures and exhibitions is guaranteed to inspire, enlighten and entertain the capital's annual gathering of the adventure sports, photography and filmmaking communities; as well as those who love the outdoors, travel and mountain adventure.

A preview of EMFF 2011 can be seen at www.edinburghmountainff.com/lineup.htm

Over the last eight years the EMFF has built a reputation as a fun, lively and inspiring event and this year has those qualities in abundance.  Highlights of the 2011 EMFF include lectures from:

*     Catherine Destivelle – 'From Boulders to Mountain Tops'. Climbing legend Destivelle, whose epic climbing career was the subject of the remarkable film 'Beyond the Summits', has made her name making remarkable solo ascents on every continent. Her inspirational talk will be a fitting climax to the festival. http://en.wikipedia.org/wiki/Catherine_Destivelle
*     Karina Hollekim – 'Fighting Back'.  Having miraculously survived a horrific sky diving accident, when her parachute failed to open and hitting the ground at 120mph, BASE-jumper and extreme skier Hollekim will talk about her career, her accident and the long road to recovery. www.karinahollekim.com
*     Johnny Dawes – 'The Stone Monkey: Full of Myself'. A rare treat to hear Dawes reflecting on his ground breaking and cult climbs around the world, using his infamous brand of metaphor and humour.  www.johnnydawes.com
*     Alastair Humphreys – 'Round the World by Bike: 60 countries. 5 Continents. 4 years. 46,000 Miles'.  In September 2001, Alastair Humphreys set off on his round the world trip. Within days, he had to completely change his planned route after the attacks on New York.  Humphreys will share some incredible stories from the journey which Sir Ranulph Feinnes described as 'The first great adventure of the 21st Century' – http://vimeo.com/18113830 & www.alastairhumphreys.com
*     Lukasz Warzecha – 'The Life of a Pro'. For a different point of view the bright new star of outdoor adventure photography illustrates his fascinating tales of life as a climbing photographer with spectacular images and films – www.lwimages.co.uk
*     Andy Turner – 'Living for Winter'. Best known for pushing the limits of onsight Scottish winter climbing, Turner will reflect on the epic winters of recent years and look ahead to his plans for the coming months. http://andyturnerclimbing.blogspot.com/

The main EMFF events are again based at the George Square Lecture Theatre at Edinburgh University, with some extra events being staged at Edinburgh International Climbing Arena (EICA), Ratho.  Tickets, which range from £5-£12, are on sale now at www.emff.co.uk

As well as the guest speakers, the EMFF will be screening over 20 remarkable films delivering adventure, high drama, thrills and spills.  The films come from across the world but there are several Scottish films making waves, including:

*     Hamish's Kayaking Films – The story of how Glaswegians Hamish and Anne Gow made the first sea kayak crossing to St Kilda in 1965 – www.youtube.com/watch?v=2c2JW7u4GLk
*      Running Wild – The incredible story of Scottish ultra-runner, Fiona Rennie, who suffered a brain hemorrhage recently but is now back running in the mountains.
*      The Pinnacle – This feature length film documents the remarkable climbing career of Edinburgh climber Jimmy Marshall, who mentored the likes of Dougal Haston and Robin Smith. The interviews with Marshall, now in his 80s, offer a privileged insight to the golden age of climbing in Scotland.
*      Speleoski – For those looking for some extreme antics Speleoski features a Scottish skier in the Alps who abseils 60m into an underground cave to go skiing in the dark, underground!

The 9th EMFF photography exhibition, in conjunction with The Mountaineering Council of Scotland, runs from 24 September to 23 October and is being staged in the main foyer of EICA, Ratho.  The exhibition features the best entries in the competition categories – Bold Move and Mountain Days and the winners will be announced on Sunday 9 October._
The festival, staged in association with Tiso, Wilderness Journeys, Mountain Equipment, Gore-Tex and EICA Ratho expects over 2,500 outdoor and extreme sports enthusiasts to attend the event.

For full details of the festival and to buy tickets – go to www.emff.co.uk

Contacts:
For further information, visuals, or to arrange interviews with any of the guest speakers, please contact:

2.    Tickets cost from £5 – £12 and are available to buy online at www.emff.co.uk and from Tiso's store on Rose Street, as well as at the festival itself (subject to availability)

3.    The festival aims to promote mountain culture and provide a platform for adventure film-makers to showcase their work. In short, to entertain, enlighten and inspire. It also acts as a social gathering for Scotland's vibrant outdoor scene.

4.    The festival features lectures by leading mountaineers, adventurers and explorers, many short films and various exhibitions.

8.    The festival is also supported by Wilderness Scotland, Alien Rock, The Mountaineering Council of Scotland, Sea Kayaking Books, Must Do Treks and Visit Norway. The festival is always keen to hear from companies or organisations which are interested in being a sponsor.