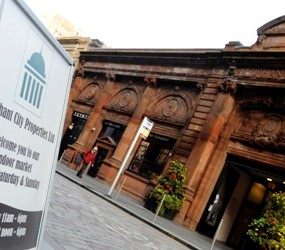 MERCHANT Square in Merchant City, the heart of Glasgow’s cultural, fashion and food quarter, has been named the fifth most vibrant city centre and piazza in Britain.

The listing by Visit Britain, Britain’s national tourism agency, describes Merchant Square as ‘a beautiful covered courtyard with a wide variety of family-friendly restaurants and cafes with bistro-style seating’ and notes that it plays host to regular events and markets throughout the year.

Jenni Morrison, of Merchant Square, said: “We’re delighted with this accolade which recognises Merchant Square as one of the most popular piazzas in Britain.

“Once part of the old Glasgow Fruit Market, Merchant Square is imbued with the history of the area’s dominating Victorian architecture, although today this sense of history blends seamlessly with the distinctly cosmopolitan ambiance that pervades the surrounding cobbled streets that bring the outside in.”

“Having recently played a central role in the success of this year’s tenth Merchant City Festival, it is fantastic news that the Square has achieved the recognition it deserves and secured a top five spot in Britain’s most vibrant city centres and piazzas.”

And Glasgow Chamber of Commerce chief executive, Stuart Patrick, said: “This is further proof of Glasgow’s growing reputation as a destination, that we can now offer a vibrant mix of bars, restaurants, theatre, live music, clubs and shopping which is the envy of other UK cities.

“The Merchant City area – and within that Merchant Square – is a key component of what Glasgow has to offer today, providing another top-class option in addition to the city centre, west end, south side and many other attractive areas and hubs.

“Glasgow Chamber of Commerce congratulates the management team at Merchant Square and, through initiatives such as Style Mile and our recent City Centre conference, we will continue to work to promote Glasgow as a destination for all.”

Every weekend Merchant Square hosts a craft fair specialising in hand-crafted items unavailable elsewhere in the city. On offer are one-off, specially made pieces and quality products including: jewellery; paintings; aromatherapy products; home-made jams and chutneys; photography and fashion accessories.

Visit Britain’s top 12 list of vibrant city centres and piazzas in Britain is:

1. Covent Garden in the centre of London’s West End

3. Ouseburn, to the east of the Newcastle Quayside

7. The Jewellery Quarter in Birmingham