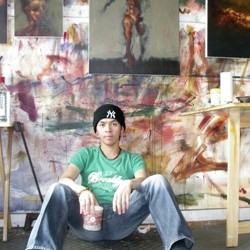 FRANK To, the young Glasgow-based artist with a growing international reputation as a leading contemporary figurative painter, is offering the public an opportunity to see his studio and works in progress at this week’s Wasps Artists’ Open Studios Weekend.

To said: “I treat my studio as a secret alchemist laboratory these days – and I wish to use this weekend to give visitors an opportunity to see what I’m planning for my upcoming shows – and I’m sure there will be a few surprises in store!”

Last week, To revealed that he has now sold more than half the paintings from his new ‘Shadowlines’ exhibition, showing at Gallery Q until 15 October, featuring work inspired by fairytales and folklore.

This latest show followed his sell-out ‘Plague Doctors’ exhibition at The Leith Gallery earlier this year.

The spokesperson continued: “Since Wasps Artists’ Open Studios Weekend began in 2002, almost 35,000 visitors have had the chance to meet artists in their studios, chat to them about their work and learn the tricks of a number of different creative trades.

“The event has also generated almost £310,000 in sales and commissions – money which goes directly into artists’ pockets.”