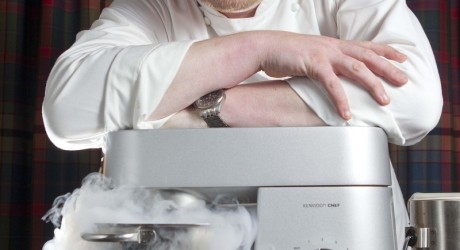 “ONE of the worst days in our catering lives also turned out to be one of the most fortuitous.”

These are the words of Neil Rae, owner of The Milton at Crathes and Raemoir House Hotel speaking of the day he met David Littlewood.

David, 28, who is quickly becoming one of the UK’s top chefs, secured his post as executive chef at the Deeside establishments after an evening of serendipity.

Neil Rae explains: “We were providing a table and bar service at an outside function where the bride had planned to provide the chefs through a friend, but a nightmare scenario was brewing when none of them showed.

“David Littlewood, a friend of one of the wedding guests, appeared and his only instruction was to feed 120 people.

“A few more challenges arose on the day but along with our team at The Milton, David managed to pull the menu together in less than six hours.

“Given his resourcefulness, dedication and passion I offered David a job at The Milton, which he eventually he accepted, before becoming Raemoir’s executive chef.”

Begins a spokesperson: “David Littlewood has since become a rising star in the hospitality industry gaining several accolades including Grampian Chef of the Year, Scottish Chef of the Year finalist twice and in 2009 he became the youngest member of the Masterchefs of Great Britain.

“One of his most memorable moments came in 2009 when he beat TV’s Hairy Bikers, Dave Myers and Si King, in a blind taste test on their TV programme.

“In one of only four episodes filmed in Scotland, the bikers visited David to learn some of his secrets and tips. They then put their skills to the test in a cook off creating dishes to showcase local produce from the area. David’s dish of local roe deer with potato dumplings, kale, parsnip puree and pearl barley sauce, won by six votes to three.”

The hospitality industry has always played a big part in David’s life.

He says: “I have always been in and around the industry from a young age as my parents owned a hotel, however I had never thought of becoming a chef until much later in life.

“I started out working as a kitchen porter and worked my way up before deciding to go to university to study law and management. During my studies I ended up working almost full time hours as a chef and quickly realised that I was much happier at work in the kitchen than I was in the lecture hall.

“I then decided to leave my studies and concentrate on becoming a chef and loved it but it does require a lot of commitment.

“I have always admired and been inspired by Heston Blumenthal as I love to experiment and tread that fine line between cooking and science, provided the techniques used improve the product.

“According to our supplier, Mansfield Cryogenic, Raemoir is, to the best of their knowledge, the only restaurant in Scotland using liquid nitrogen. I find Heston’s methods fascinating and I am always keen to try anything that’s a step away from the norm.”

For budding chefs who wish to follow in David’s successful footsteps, he gives the following advice: “For those who wish to get into the industry, but are unsure where to begin, the best place to start is by picking up the phone and contacting local training centres or modern apprenticeship schemes.

“When deciding which route to take it really comes down to the type of person you are.

“There are some really good apprenticeships available if you prefer the hands-on method to learning, however there are also some great full time training centres in Aberdeen.

“Everyone is different, some people, like myself, thrive from on-the-job training where as others are better suited to traditional learning methods in a classroom.

“My biggest piece of advice, if hospitality is a career you really wish to pursue you have to be committed as it requires long hours and hard work but it’s worth it!”

David is once again stretching his culinary skills by taking part in this year’s Royal Deeside Larder Venison Festival, a six-day celebration of Scottish venison across Deeside and Donside.

The mouthwatering programme of events will run from the 25th – 30th October at various locations. It is the ultimate gastro treat for those keen to sample delicious game in different ways.

Dozens of local producers, hotels, restaurants and country estates across the region will join together to create a mouth watering programme of venison-themed activities.

As part of the festival David has created a delicious dish of venison loin with slow braised shin and red cabbage which he will be featuring on the menu at Raemoir House Hotel throughout the six days.

The Royal Deeside Larder Venison Festival is being organised by the Royal Deeside and The Cairngorms Destination Management Organisation (DMO) Larder to highlight the region’s high quality food and drink.

Royal Deeside & The Cairngorms DMO is the official Destination Management Organisation for tourism businesses in the areas of Royal Deeside, Donside and the Eastern Cairngorms.