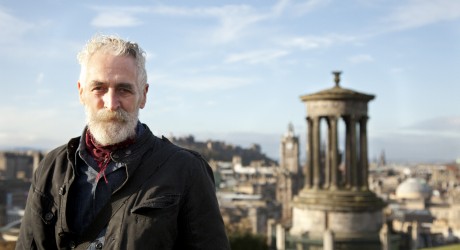 The overriding theme of The John Byrne Award, founded in 2010, is ‘Inspiring Values for Today’.

It encourages sixth-year (17/18) students attending school in Edinburgh, as they prepare for adulthood in today’s society, to consider values in the context of the world that they know and live in and to examine and challenge them.

Teams of students and individuals are asked to respond to a piece of text related to this theme, ‘The Stimulus’, carefully selected by the judging panel.

This year, in celebration of the 400th anniversary of The King James Bible, the stimulus for the 2011 John Byrne Award is an extract from the King James version – The Sermon on the Plain, from The Gospel According to Luke, Chapter 6, vs 17-49.

Begins a spokesperson: “By 18 November entrants will have to respond to the Sermon on the Plain and submit a creative piece of work, in any media (music, drama, musical, video, prose, etc) together with a supporting statement.

“On the 23 November the 2011 shortlist will be announced.

“The shortlisted entrants will then have to present their ideas to the judging panel on 25 November. The winners will then be announced at Edinburgh’s City Chambers on 30 November.”

The spokesperson adds: “The judging panel will look for an independent response to ‘The Stimulus’ that reflects competitors’ thoughts, their study and the conclusions they have drawn, with reason, clarity and imagination.

The sponsor wishes to acknowledge the support and advice provided by the Children and Families Department of the City of Edinburgh Council and, in particular, Councillor Marilyn MacLaren.

At the Arts & Business Scotland Awards in Aberdeen, last night (26/10/11), Andrew Paterson was presented with the special Philanthropy Award for his outstanding support of the John Byrne Award.

The event is held each year to recognise the most outstanding and creative partnerships between business and arts organisations.

Steve Small, award coordinator the John Byrne Award, said: “It was very encouraging to get such a good response in our first year, and we were delighted with the variety and quality of entries received. And so this year we set the challenge again with great excitement and high hopes.

“While this year’s ‘Stimulus’ comes from Christian teachings, our aim is not to promote Christian values, or values from any particular culture or creed. We have, quite simply, given our competition entrants food for thought. To agree or disagree with anything – or everything – in the passage is entirely their choice.

“We look forward very much to discovering how the stimulus makes them think, and what it has led them to decide about values appropriate to their world.”

The award is named after prominent Scottish artist, playwright and writer John Byrne, as the sponsor’s choice of a man whom is described as “a delight to be with” and “inspiring”.

The sponsor sees John as a man who has made the most of his diverse creative talents throughout his career and consequently has given, and continues to give, great pleasure and more importantly, inspiration to people of all ages from all walks of society.

Last year, the stimulus was the speech given by Jimmy Reid, trade union activist, on the occasion of his inauguration as Rector of Glasgow University in 1972.

There will be one overall winner, or winning team, selected by the judges. £5,000 of the money should be donated to one or more social projects, the choice of which will be determined by the winner(s). The remaining £2,000 may be spent on personal development.

There will be three teams or entrants selected by the judges for special commendation. Each will be awarded £1,000 to spend as they choose.

The criteria for selection for these awards may depend on factors such as originality of concept, quality of presentation or quality of research, but will ultimately be a matter for discussion and consensus between the judges.

If you would like to see how the quality of your entry will be assessed, please see our judging criteria.

Please also take time to view the competition archive, to find out how last year’s winners used their prize money.