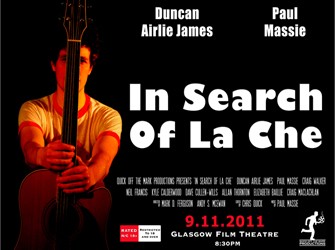 QUICK Off The Mark Productions is pleased to announce that the Glasgow Film Theatre will play host to the premiere of our first feature film, ‘In Search Of La Che’, on the 9th of November 2011.

John hires a film crew from a local production company and arranges to meet with characters from Roxy’s past as well as other die-hard fans.

Although on paper, the documentary sounded fairly straight forward, John never anticipated that his interviewees would range from the mentally unstable to the criminally insane.

During his interview with his Roxy’s first manager, Hector ‘Blitzkrieg’ Wallace, John has a close encounter with death when the enraged interviewee suddenly pulls a gun on the crew and chases them out of the building.

In the process, John’s sound-man is abducted by Blitzkrieg and a deflated John considers pulling the documentary.

However, John strikes gold when he receives permission to interview Gary Pringle of Met Records where Roxy produced his two platinum albums that were a major hit around the world.

Gary’s information opens up new channels for John to investigate and with the help of Roxy’s former roadie, Shimmy Quiffer, he solves one of the greatest mysteries of modern time. The location of Roxy La Che.

Directing In Search of La Che came about almost by chance, after I met up with the screenwriter, Andy McEwan, to discuss other projects. I was intrigued when Andy mentioned the story in passing, and I asked for a copy to read it over.

I was barely halfway through reading it when I knew that I wanted to make the film.

We began discussing character motives, and as we bounced ideas off each other we gradually built up the structure which would become the final script.

Although it was agreed that I would direct the film, I wanted Andy to assist me in this role, and his insight and vision helped me greatly throughout the project.

Early in the planning, I showed the script to my colleague, editor Chris Quick, and asked if he would be interested in coming aboard.

He became editor and a co-executive producer.

After reading the first draft of the script, Chris, Andy and myself made slight changes to end up with a final draft we were all happy with that gave a total running time of a solid 70 minutes.

Setting up the crew was easy in a sense as we had decided to make it as small as possible in order to keep costs down.

So, Dave Craig, an associate on other projects, took charge of sound recording.

We were also pleased when Leesa McInnes offered her expertise, joining the team as lighting director.

Andy, Chris and I jointly took on the work of casting because we already had several actors in mind and had a good idea of the cast we wanted.

We agreed that the lead role should go to Duncan Airlie James, who is a six-time world Thai kickboxing champion.

We wanted to film in Glasgow and the Central Belt, and the search for locations began. Fortunately, Duncan eased the pressure in part by offering the use of his father’s home.

The project also benefited from the great co-operation of North College in the city: we were given access to their studio and allowed to use an office for an interview scene.

One struggle we had was to find a few weird props to match some of the crazy characters in the film, including gas masks and Nazi paraphernalia.

This led to a few interesting conversations!

When filming got under way, everything went smoothly at first – but then the snow began to fall.

Many shoot days had to be postponed, and finally we had to hold off till winter was over before continuing. However, we were able to complete the remaining scenes within a few weeks.

We then found that the still photographs – for use as cutaways – unexpectedly involved as much planning and time as any filmed scene. And not the least of our problems was getting all the actors together on some shoot days.

But we got there in the end, and for the most part we hugely enjoyed this first venture into feature-length film-making.

In Search Of La Che was initially just an idea discussed in the confines of our college classroom back in 2006.

The thought that one day it would become a feature film, was beyond belief.

The story of La Che was simply a concept that was discussed informally now and then during conversations but there was never any proper structure or goal to it and could never have been taken seriously as a plausible pitch for a film.

Fast forward four years to 2010: the UK is in one of the worst recessions since the Second World War.

The level of corporate work was dwindling, so the attraction of a creative project seemed more desirable. With various ideas floating about the office, the idea of developing Roxy La Che into a film seemed like the most attractive path to take.

With the concept in mind, work began in June 2010 on a script with our fellow college companion, Andy S. McEwan.

Production of the film started at the end of October 2010, with a vibrant cast on board including Duncan Airlie James (Scotland’s most successful thai kick boxing champion) and a cameo appearance from Steve Nallon (Spitting Image).

The filming process continued through till August 2011, with a brief interval in the winter due to abnormal weather conditions.

Post-production work on the film officially ended in September 2011 bringing to a close our companies most ambitious project to date.

MEDIA RELEASE posted by Quick Off The Mark Productions. You too can post media releases (aka press releases) on allmediascotland.com. For more information, email here.