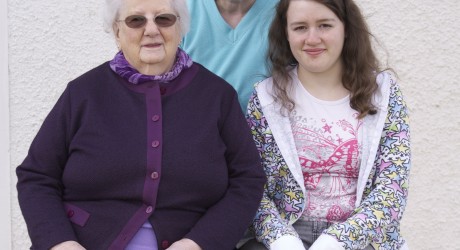 A NIGHT out at the rural is a real family affair for 88 year-old Isa Scougall after she became matriarch of three generations of her family to join the same branch of the Scottish Women’s Rural Institutes.

Mrs Scougall has been a loyal member of the SWRI since 1942 and always hoped that her family would one day follow in her footsteps.

Her daughter, Wendy Greenlees, started accompanying her to meetings when she was a teenager and now they are joined by 14 year-old granddaughter, Shanna.

They are all members of Madderty SWRI in Perthshire, which is believed to be one of only a handful of institutes in the country to boast three generations of the same family within its membership.

Mrs Scougall says she is very proud of her family’s long standing-connection to the SWRI and hopes that it will continue to unfold in future.

She adds: “I was so pleased when Shanna said she wanted to join. She has always been aware of the rural growing up, and I think it has a lot to offer young people like her. I’ve been a member for almost 70 years and I come away from every meeting feeling that I have learned something new.”

Following the outbreak of World War II, Mrs Scougall signed up for the Land Army and moved from Glasgow to Crieff where she worked on a farm. She loved it so much that she jumped at the chance to stay on and become a permanent member of the farm staff.

“The farmer’s wife used to go the SWRI and because there were no lights allowed during the blackout, I used to cycle up to the hall on my bike to meet her and walk her home. The president of the Institute asked me if I wanted to join and the farmer’s wife paid my subscription.

“I found it so useful because I had never had to look after myself before. My mother looked after me in Glasgow, so I had never even cooked for myself. I started making things and baking, and I got quite good at it – I even won a few prizes in the competitions.

“When I married my husband, David, he felt it was important that a joined as many groups and clubs as possible because it would help me to meet people and become accepted in the local community. He was right – I’ve made such good friends by going to the rural.”

Mrs Scougall introduced Wendy to the SWRI when she was a youngster: one of her earliest memories is going along to a meeting where a visiting Institute was performing bothy ballads as part of the evening’s entertainment. Now 49 and an administrative assistant at Crieff High School, Wendy continues to be a staunch supporter of the rural.

“Even when I was away studying I would still go to as many meetings as possible,” says Mrs Greenlees.

“I really enjoy the social contact and the meetings are a great way of keeping in touch with people, which is really important in a rural area.

“I love the fact that it is so interesting and every meeting is different – a few months ago we even found ourselves being invited into the back of an ambulance after a local crew visited to give a talk. There’s so much more to the rural than just crafts and baking, and I feel it’s important that the SWRI continues to speak up for rural communities on the issues that matter.”

Shanna joined up on her 14th birthday, but had already been to a few rural meetings – including one where she was invited to give a presentation to the group about her pet corn snakes.

She says: “There were a few shocked expressions, but I think they enjoyed meeting them.

“The rural is great fun and I enjoy spending time with the older ladies because you can learn so much from them. I’ve already been shown how to make boxes and bake pancakes – I can’t think of anywhere else where I would be able to learn that.”

SWRI national chair, Isobel Robertson, said that it was very unusual for an Institute to boast three generations of the same family in its membership.

Mrs Robertson, who is also a member of Madderty SWRI, adds: “In this day and age, it is very rare. It is great to see enthusiastic young people like Shanna joining the SWRI and it has had a really positive effect on the Institute.”

Scottish Women’s Rural Institutes (SWRI) is one of the largest women’s organisations in Scotland and celebrated its 90th birthday in 2007. It boasts around 20,000 members, in 33 Federations throughout Scotland, from as far north as Shetland to Wigtownshire in the South West.

More information on the SWRI can be found at www.swri.org.uk, or by calling SWRI headquarters in Edinburgh on 0131 225 1724 or  email  swri@swri.demon.co.uk