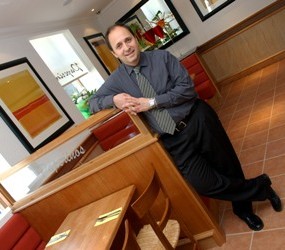 IN the week that Glasgow officials have been subject to stinging criticism over a seeming reversal of city council policy to encourage al fresco wining and dining, the family behind Paperino’s, the family-run Italian restaurant group, has nothing but praise for the way that Glasgow’s restaurant scene has developed over the last two decades.

And Paperino’s proprietor Stefano Giovanazzi is inviting diners to raise a complimentary glass of prosecco in toast to its 20th birthday.

He said: “Despite the current economic challenges facing all businesses, Glasgow’s restaurant scene has thrived over the past two decades to the extent that it’s unrecognisable to what was on offer when we opened our doors in 1991.

“Despite the current debate over al fresco dining in Glasgow, the fact remains that diners in Glasgow have far more options available to them today than was the case then – and the quality of cuisine available in Glasgow is far superior to what it was then.”

When brothers Stefano and Sandro Giovanazzi opened the original Paperino’s in 1991, the combination of classic food in a relaxed environment was new to Glasgow and the now-traditional look of whitewashed walls and terracotta floor redefined the way the city’s restaurants were designed.

Food fads might have come and gone since then, but the Glaswegian appetite for fresh Italian cuisine has been constant. Paperino’s is renowned for its traditional Italian cuisine, offering an extensive range of pasta, pizza and meat and fish dishes. Smaller wonder that it quickly established its place as a firm favourite with the Glasgow Italian community.

The brothers attribute much of the restaurant’s success to the contribution made by its staff over the years.

Stefano Giovanazzi said: “Many of our key members of staff have remained with us throughout these last 20 years and I have no doubt that it is the constancy of a quality service, as well as an established menu, that has played a vital part in the success of the restaurant.”

Running throughout the week of Sunday 13th to Saturday 19th November, all customers at the original Paperino’s at 283 Sauchiehall Street will be invited to join in the birthday celebrations with a free glass of sparkly.

The popularity of the original Paperino’s was such that sister restaurant, Paperino’s West End, opened at 227 Byres Road six years ago, followed by Paperino’s @ 78 St Vincent Street in 2009, coinciding with the 75th birthday of Walt Disney’s Donald Duck, from which the restaurants derive their name.

Issued on behalf of Paperino’s by Liquorice Media tel 0141 561 4018 www.liquorice-media.com