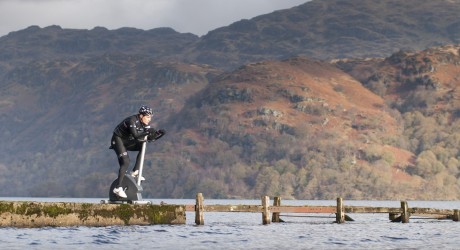 Online entries for this much anticipated event will open on Monday 14 November 2011 – http://www.thescottishbikeshow.com/sportive.

Taking in some of Scotland’s most beautiful glen, loch and mountain landscapes The Scottish Bike Show Sportive offers two challenging routes, a 100-mile Sportive ride and a 65-mile Challenge ride.

Both fully signed and marshaled rides will test all round biking skills and fitness levels with some tough long climbs and fast descents throughout.

Rowan Mackie, organiser of The Scottish Bike Show from Magdala Media, said: ‘We are really excited about the Scottish Bike Show Sportive and the prospect of showcasing the stunning hills, glens and lochs of the Loch Lomond and Trossachs National Park to the UK’s cycling community.

‘We have two fantastic routes for the inaugural event.  The rides are challenging, particularly at the start and I am sure they will make for a fitting start to the Sportive season in 2012.  I hope The Scottish Bike Show Sportive become a firm favourite on the UK’s annual sportive calendar.”

Starting at Balloch Castle on the edge of Loch Lomond both rides will head north-east towards Aberfoyle and into some long and extremely challenging climbs. There is one particularly testing climb of two kilometres at a ten per cent gradient!

At Loch Katrine the shorter Challenge route splits off west and tours around the loch before heading back via Stronachlacher; passing Loch Chon and Loch Ard, before turning back towards Balloch Castle and the finish.

While the Challenge riders begin their tour round Loch Katrine the Sportive riders will travel eastwards towards Kilmahog.

They will then head north, passing Loch Lubnaig, Lochearnhead and Loch Earn, before moving west past Loch Lubhair and Loch Dochart towards Crianlarich.

The route then heads south passing Loch Lomond, Loch Long and Glenmallan, Auchenvennel and Dumfin before the final run back to Balloch Castle.

Entries to The Scottish Bike Show Sportive will open on Monday 14 November 2011.

Entries are open to all cyclists aged 17 and over and start at £21 for the Challenge Ride and £25 for the Sportive Ride (if booked before 03 January 2012) with discounts available for group bookings.

Full entry and booking details can be found on the website – http://www.thescottishbikeshow.com/sportive.

Entries to the Sportive will also include entry to The Scottish Bike Show.

The Prostate Cancer Charity is the official charity partner of The Scottish Bike Show Sportive. Prostate cancer is the most common cancer in men in the UK. 37,000 men are diagnosed with prostate cancer every year. 250,000 men are currently living with the disease.

Organisers hope that all riders taking part will raise funds to help save men’s lives.

It will be staged at the SECC (Scottish Exhibition and Conference Centre) from Friday 13 to Sunday 15 April.

Following the huge success of TSBS in 2011 organisers, Magdala Media, have added an extra day to next year’s show. They have also increased the exhibition space by more than 1,200 square metres allowing for more exhibitors, more brands, more challenges and promotions, more displays and features and bigger test tracks to keep the projected 10,000 visitors entertained all weekend.

For the second year running Scotland’s growing cycling community – road, mountain bike, bmx and leisure riders and commuters – will have an all encompassing cycle show right on their door step.

With an expanded number of independent bike shops, distributors and manufacturers selling a huge range of the latest bikes, cycle gear, clothing and accessories; a central arena hosting jaw-dropping cycle stunt displays, from among others the BSD BMX stunt team; have a go bike test sessions and Scotland’s cycling organisations and cycle centres offering expert advice, there will be something for everyone.

The indoor forest track offering great trail features in a safe and fun environment to cyclists of all ages, that proved so popular this year, will double in size for 2012.

The latest addition to the growing number of partners comes in the form of Future Publishing – Cycling Plus, Mountain Biking UK, Procycling, What Mountain Bike, bikeradar.com and cyclingnews.com.

Already confirmed as key sponsor is Alpine Bikes, with Sustrans, Cycling Scotland and Singletrack all confirmed as partners to TSBS 2012.

For further information on The Scottish Bike Show and to book tickets go to: http://www.thescottishbikeshow.com/