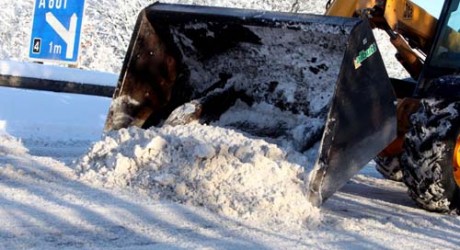 EAGLE Couriers are preparing their drivers for another bitter winter and hope the Scottish Government’s early initiatives this year will prevent another grid-lock catastrophe.

Jerry Stewart, director of Eagle Couriers, said he is hopeful that the Scottish Government’s early response is a sign that it has learnt lessons from the disruptions caused during the previous two winters.

He said: “Transport Scotland launched their £15 million winter service in October ahead of predictions that Scotland is set for below average temperatures from December through to February with heavy snow expected to fall from November to January.

He added: “Our company was nearly ground to a halt last year after the country experienced some of the worst snowfall in recent memory.

“The M8 motorway – the busiest main route in the country – closed for an unprecedented two days, our drivers use this particular road hundreds of times a week, so its closure was a catastrophic disruption to the business.

“Transport Scotland, along with the country’s 32 local authorities has begun procedures to ensure Scotland’s 2,000 miles of motorways and trunk roads can be treated in the event of snow and ice.

“Salt stocks are at 70 per cent of the total levels used last year which is a vast improvement on last year; however, road authorities cannot guarantee to keep roads free from snow and ice in adverse conditions.”

Jerry continues: “It’s understandable that when severe weather hits there will be inevitable disruptions even with the best of plans but we hope that the operating companies really will be better prepared to keep Scotland moving this season.

“The high percentage of salt stocks must surely be an improvement on last year and more salt stock available hopefully minor roads will be treated with the same level of concentration as the major ones as it was these routes that caused the most problems for our staff and no doubt other drivers.”

While Keith Brown is preparing road authorities, Eagle are doing their own preparations to get their staff ready for the winter ahead by providing them with emergency kits containing tools designed to deal with harsh weather conditions, including shovels, gloves, ice scrapers and torches.

“Road users are being invited to play their part too, by contributing information about any problems experienced in particular areas. This is a service Eagle Couriers will be involved in to help other commuters during a period which is inevitably going to be difficult despite early preparation.”

Eagle Couriers runs a fleet of 100 vehicles operating from bases in Glasgow, Bathgate and Edinburgh.   The company has almost 30 years’ experience providing safe and quick logistics services to organisations across the private, public and third sectors as well as working directly with consumers.

Since the widespread panic caused by last year’s severe weather conditions, Eagle Couries is adding a public service to its remit by sending Facebook and Twitter updates alerting motorists about what’s happening on Scotland’s major roads ahead of traffic updates.

For further information on Eagle Couriers visit the company’s website at www.eaglecouriers.co.uk or call a member of the team on 0845 123 1230.

Issued on behalf of Eagle Couriers by the Holyrood Partnership. For more media information, contact 0131 561 2242 or email info@holyroodpr.co.uk

MEDIA RELEASE issued by the Holyrood Partnership. You too can post your story ideas for journalists (aka Press or media releases), on allmediascotland.com. Email here for more information.