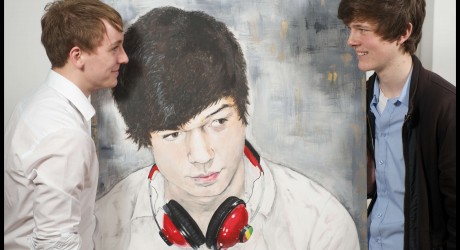 LAST night (30 November 2011) – at a ceremony at The Ingleby Gallery, Edinburgh – a team of sixth-year pupils from St. Thomas of Aquin’s High School won the John Byrne Award 2011 for their triptych of portraits inspired by triptychs from early Renaissance painters.

The artist, playwright and writer, John Byrne, presented the winning team with an amazing £7,000 cheque, £5,000 of which will be donated to one or more social projects chosen by the winners.

The remaining £2,000 will be spent on personal development for the team.

“It was set up to encourage sixth year [17/18] students attending school in Edinburgh, to consider values in the context of the world that they know and live in and to examine and challenge them using any media of their choosing.

“The nature of this challenge is tremendously important at this time, particularly to these young people, and there was a phenomenal depth and breadth of skill demonstrated in all of the presentations we saw.

“There was also a diverse array of media used, from art work to original music and film, moving away from the over dominance in writing in schools today.”

They were asked to respond to a piece of text related to the values theme, ‘The Stimulus’.

This year, in celebration of the 400th anniversary of The King James Bible, the stimulus was an extract from the King James version – The Sermon on the Plain, from The Gospel According to Luke, Chapter 6, vs 17-49.

Alex Wallace added: “It was not an easy job picking the winner and it wasn’t a unanimous decision because of the high level of excellent entries. However, overall we felt that the tryptych from St. Thomas of Aquin’s High School was remarkable in terms of its collaborative output. The team understood the brief, fulfilled the criteria and gave a remarkably polished presentation to back up their work.”

The paintings from St. Thomas of Aquin’s were a collaborative effort with four team members involved in painting each portrait.

The first is of an old man representing the failure of society towards old people.

Three teams were Highly Commended for their presentations and won runners-up awards:

* Boroughmuir High School, for their collage of painting and mixed media inspired by issues of corruption and greed, together with a film charting the creation of the artwork

* Currie High School, who composed a song, using text from the Bible, and produced a music video looking at God’s creation of nature and the need to look at oneself to make a difference

* James Gillespie’s High School, for their 15-minute musical composition and supporting artwork with a team of Christians and atheists stimulating debate on the passage from The Sermon on the Plain.

Through discussion and consensus they were looking for an independent response to ‘The Stimulus’ that reflected competitors’ thoughts, their study and the conclusions they have drawn, with reason, clarity and imagination.

The John Byrne Award is privately-funded.

The sponsor wishes to acknowledge the support and advice provided by the Children and Families Department of the City of Edinburgh Council and, in particular, Councillor Marilyne MacLaren.

City education leader, Cllr Marilyne MacLaren, said: “The John Byrne Award is going from strength to strength and I was delighted to see so many fantastic entries from our pupils.

“There’s a huge pool of talent out there and I know the judges had a tough time picking a winner but the St Thomas of Aquin’s project was stunning.

“It explored the subject exceptionally well and the team are deserving winners.”

For further information on the 2011 John Byrne Award and to find out how last year’s winners used their prize money, please visit: http://www.johnbyrneaward.org.uk

The award is named after prominent Scottish artist, playwright and writer John Byrne, as the sponsor’s choice of a man whom is described as “a delight to be with” and “inspiring”.

The sponsor sees John as a man who has made the most of his diverse creative talents throughout his career and consequently has given, and continues to give, great pleasure and more importantly, inspiration to people of all ages from all walks of society.

Last year, the stimulus was the speech given by Jimmy Reid, trade union activist, on the occasion of his inauguration as rector of Glasgow University in 1972.