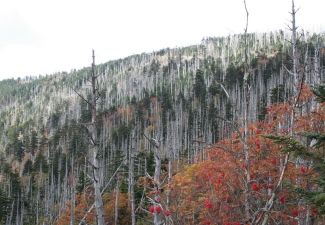 AN innovative conservation project based in Scotland is leading the way in a bid to save Christmas trees for the future generation.

The iCONic project, a Perthshire Big Tree Country initiative, is an international collaboration set up in 2009 to help experts pioneer the conservation of the many threatened species of conifers around the world.

Says a spokesperson: “Globally there are around 700 species of conifers and around half of these face potential extinction in the wild, including the Fraser fir (abies fraseri) which is one of Europe’s most popular choice of Christmas tree as it holds its needles, retains its colour and smells fantastic.

“A diverse range of threats are targeting conifers and associated forest types world-wide  including illegal, and uncontrolled logging, habitat destruction for land use conversion, over-grazing, pests and diseases and climate change.

“The humble conifer takes centre place in our living rooms every winter, covered in baubles and lights, and is at the heart of every family Christmas. They also provide us with timber for construction (some 70 to 80 per cent of world timber trade is sourced from conifer forests) and fuel, furniture, fixtures and fittings as well as essential nourishment for forest animals in their own habitat.

“The Fraser fir is found in a narrow strip of the Appalachian Mountains in Eastern USA but has in recent years suffered decline from a heavy attack by a pest called Balsam Wooly Adelgid.

“It is also adversely affected by acid-rain. Since the attack, vast swathes of indigenous Fraser fir have died and the International Union for Conservation of Nature has now categorised this species as vulnerable.

“However help is on hand for what is best known as the humble Christmas tree. The iCONic Project, which brings together the Royal Botanic Garden in Edinburgh, the ICCP, Forestry Commission Scotland and Perthshire Big Tree Country in what is ultimately a long term mission to help save conifers, including the Fraser fir, from being lost by creating conservation plantings in Perthshire, right  in  the heart of Scotland.”

Fresh from a seed collecting expedition in the natural forests of North Carolina and Tennessee, Bedgebury National Pinetum in Kent gifted the raw materials to iCONic who has secured a site for them in Perthshire’s ‘Big Tree Country’ to enable the protected re-growth of the species.

Tom Christian, project officer for iCONic and based at the Royal Botanic Garden Edinburgh, has taken the lead on the project.

He commented “Local efforts to conserve tree and forest habitats in their native surroundings are clearly of prime importance and we support all such efforts. Other options provide essential ‘insurance’ thus by planting threatened species in  local  conservation collections, like we are doing here in Perthshire, we are providing a much needed insurance policy to help guard against extinction.

“These plants have been carefully planted in selected sites in Perthshire and the Fraser fir is well suited to our local climate.

“The young plants are settling into their new home extremely well and because they are of known wild origin we hope that in years to come they can play key role in the reforestation of Fraser Fir forests and, of course, helping keep up the supply of Christmas trees for future generations.”

The iCONic Project is currently a  ‘seedling’  in the world of conservation, however has already caught the attention of a number of leading conservationists who anticipate that it will become the root of reforestation in years to come.

Martin Gardner, from the Royal Botanic Garden Edinburgh, has coordinated the International Conifer Conservation Programme since its establishment in 1991.

He commented “Over the last 20 years I have visited over 30 countries in order to study and collect research materials of threatened conifers and their associated species and the iCONic Project is unique in its approach to tackling this challenge.

“The traditional Christmas tree is just one of several hundred species which are facing extinction including the rare but incredibly popular Monkey Puzzle from Chile and, believe it or not, the Giant Redwood from California.”

The iCONic Project is reliant on funding to enable it to meet its conservation objectives. It has recently opened up this funding to the general public via The Big Give site and is inviting you to help them in their efforts by helping raise £25,000 through its ‘Not Just Fir Christmas’ fund.

“There are 30 million households in the UK and the vast majority of them will have a Christmas tree in their front room this month – if each of them could give just £1 we could make a massive difference,” said Tom.