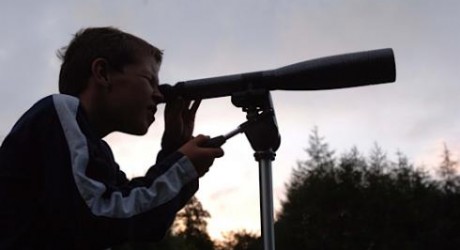 STAR gazers young and old have been flocking to Newton Stewart Youth Hostel this winter to take advantage of the UK’s first Dark Sky Park in Galloway forest park.

Forestry Commission Scotland established part of Galloway Forest Park as the first Dark Sky Park in the UK in 2009 proving a massive achievement for the UK and the south west of Scotland.

Derrick Clisham, hostel manager at Newton Stewart Youth Hostel, said: “We have seen an increase in families coming to stargaze this year. It’s a great attraction for the area and seems to be a firm family favourite especially at this time of year. We are also looking forward to developing this as an educational tool for the hostel.”

Keith Muir, head of the Forestry Commission’s Tourism, Communities & Environment team in Galloway, said: “We do get a lot of families coming to experience our Dark Skies. Soon after the designation was awarded we had a north London family of four visit and with ages ranging between ten and 65 – they had a fantastic time.

“They were so taken by it they wrote to me to tell me how they were all entranced by the sheer beauty of the skies over Galloway, seeing the plough, the seven sisters and the fantastic Milky Way.

“It just goes to show that the night sky is a thing of fascination and wonder for all ages – and it’s all free!”

Newton Stewart Youth Hostel is set in a fine hill walking and cycling area on the outskirts of the picturesque town of Newton Stewart.

Housed in an old Victorian school building close to the Galloway Forest Park and the Southern Upland Way, Newton Stewart Youth Hostel offers budget accommodation to the wealth of travellers taking in the south west of Scotland, as well as providing a valuable addition to the town’s landscape and tourism business.

Newton Stewart Youth Hostel can be rented from SYHA for exclusive use throughout the winter season.

SYHA is an 80 year-old charity which provides youth hostelling accommodation for the education, health and wellbeing of people in Scotland and beyond.

SYHA currently has a network of around 65 Youth Hostels, including 25 independently-run affiliate hostels.

As a not-for-profit organisation, any income generated from the provision of youth hostelling is invested back into the network of Youth Hostels in Scotland.

SYHA is open to all and offers free membership to young people under the age of 16 along with those in full time education.

We are part of the Hostelling International Network which offers affordable and accessible opportunities to visit locations in 80 countries across the world.

SYHA is the largest budget accommodation provider in Scotland.

SYHA hosts on average 500,000 guests annually bringing people to Scotland from all over the world.

VisitScotland estimates that SYHA contributes over £24m pa to the local tourism economy.

SYHA Hostelling Scotland has a network of 71 hostels throughout Scotland, including 25 affiliate hostels.

The charity’s Youth Hostels serve most of the country’s most desirable destinations, from key urban locations to breathtaking rural areas, including some of Scotland’s most remote, and enticing, beauty spots.

The charity listens to members’ and customer’s feedback and in response to the evolving market, now provides many more single, twin and family rooms with en-suite facilities, in addition to traditional multi-occupancy accommodation.

Affordable travel is part of the founding ethos of SYHA, and this stands today, with an average nightly cost of only £16 for dormitory accommodation or £20 per person in a private room.

Recent figures suggest hostelling is proving popular for the ‘staycation’ market. In 2010, 33 per cent of overnight guests were Scottish, 27 per cent British and Irish, 29 per cent European and 11 per cent other international visitors.

SYHA Hostelling Scotland is part of the VisitScotland Hostel Quality Assurance Scheme and the largest participant in the Green Tourism Business Scheme in Scotland.

MEDIA RELEASE issued by SYHA Hostelling Scotland. You too can post your story ideas for journalists (aka press or media releases), on allmediascotland.com. Email here for more information.