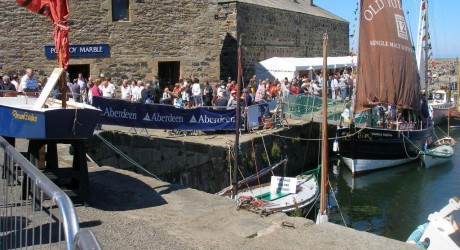 THE Aberdeen Asset Management Scottish Traditional Boast Festival is raising its anchor to set sail on another voyage of heritage and culture.

The dates for the 2012 event have been confirmed as Saturday June 23 and Sunday June 24. It will be the 19th year of the festival, which takes place in Portsoy on the North-east coast of Scotland.

In previous years, crowds in excess of 16,000 have attended the community-run event celebrating the rich maritime traditions of the area.

Says a spokesperson: “Traditional wooden boats from across the UK and Europe are expected to attend the Festival, which has Portsoy’s historic 17th century harbour as its backdrop.

“The organisers put strong emphasis on boat building, restoration and sailing, but visitors will also find an extensive programme of associated traditional skills such as knitting and weaving.

“Food and drink, craft and music forms an integral part of the event, ensuring that it really does offer something for everyone.”

It is anticipated that the Festival will also be a key event for the year of Creative Scotland, with many of the planned activities focusing on local song, dance and storytelling and the creative links between Scotland and its European neighbours.

He adds: “The Festival has come a long way since it was launched almost 20 years ago, growing in stature and expanding its programme to celebrate the whole breadth of maritime culture and much, much more.

“We plan to have more of an international flavour in 2012 by attracting an increased number of boats and crews from our near neighbours in Europe.

“We aim to develop and improve the Festival every year, and there are lots of exciting prospects in the pipeline even at this early stage.”

This will be the second year of a three-year sponsorship of the event by Aberdeen Asset Management.

Chief executive, Martin Gilbert, himself a keen sailor, says that the team of volunteers behind the Festival will organise an unforgettable weekend.

He adds: “The Festival has developed an unparalleled reputation for the quality and diversity of attractions that it stages for both sailing enthusiasts and visitors.

“This is underlined by the volume of people visiting the event from the local area and from further afield. The contribution that the Aberdeen Asset Management Scottish Traditional Boat Festival makes to the local economy and the tourism calendar cannot be underestimated, and I am sure that once again that the organising committee will deliver a highly enjoyable and memorable event.”

The Aberdeen Asset Management Scottish Traditional Boat Festival grew out of the celebrations staged in 1993 to mark the 300th anniversary of Portsoy’s old harbour.

It was developed into an annual event and has grown to such an extent that it is now recognised by VisitScotland as being one of the region’s flagship tourism events.

The Festival is now a growing social enterprise which also runs the Salmon Bothy in Portsoy – a museum and community space, the PORT (Portsoy Organisation for Restoration and Training) Project which aims to keep alive traditional boatbuilding skills and has just agreed with Aberdeenshire Council that it will take ownership of the attractive caravan park at Portsoy.

For further information on the Scottish Traditional Boat Festival visit www.scottishtraditionalboatfestival.org.uk or call 01261 842951.