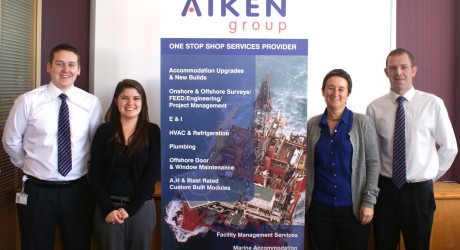 ONGOING growth has resulted in a wave of appointments at Aberdeen-based Aiken Group.

The company employs 56 staff at its Aberdeen headquarters, plus more than 100 contractors worldwide.

The company recently announced that turnover has doubled in the last three years to £12 million.

Lee Reid has been appointed to the role of electrical and instrumentation engineer whilst Robert Soutar becomes CAD draughtsman and Tina Carle recruited as a trainee project engineer.

In addition, Tracy Anderson has been taken on as onshore facilities manager.

Commenting on the recent appointments, Aiken Group managing director, Danny Donald, said: “These four new members of staff have been employed as part of our ongoing recruitment drive which is likely to bring further new faces to the company in the near future.

“The need for these new positions has been brought about by increased demand for our services, and our desire to enhance our service provision.”