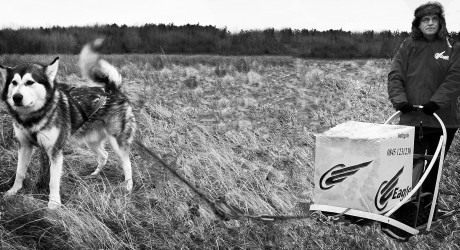 SNOW-hit couriers have called in the experts for tips on making deliveries in Arctic conditions – a sled-racing team.

Staff from Eagle Couriers, the biggest independent courier firm in Scotland, jumped at the chance to meet up with Buck the Alaskan Malamute and the dog’s owner, David Ezzi.

Director, Jerry Stewart, said: “We could have done with help from Buck last year when Scotland was blanketed with snow and the road network seized up.

“We are the experts when it comes to making deliveries on wheels, but there is no doubt there are times when a sled pulled by dogs would be more appropriate.

“So far we’ve not seen the kind of snow-related chaos we suffered last winter and we’re doing everything we can to prepare. With a bit of luck we’ll escape a whiteout so won’t have to call on Buck and his handlers to make the more difficult deliveries.

“One thing is for sure, the sight of an Eagle Couriers dog sled making deliveries would certainly make the competition Buck up their ideas!”

Alaskan Malamutes are similar to Siberian Huskies and are popular animals for competitive sledding. Eagle Couriers are now giving much-needed financial backing for David and Buck to help them participate in the sport.

The donation from Eagle Couriers will help David and his nine year-old son, Marco, to buy a new sled for the 2012 racing season.

The youngster, from Armadale, West Lothian, has shown a real talent for the sport and was previously using a sled borrowed from a friend. However, he is now competing against his friend and needs a sled of his own.

David said: “I am blown away by the support that we have received in the quest for our new sled. We are extremely grateful to Jerry and the team at Eagle for their very generous donation.”

And he joked: “Needless to say, once we are up and running if Eagle Couriers ever find themselves struggling to reach anywhere because of snow, we’ll be delighted to step in.”

David and Marco are both members of racing associations which include The Scottish Siberian Husky Club, Siberian husky club of Great Britain and The Sled Dog Association of Scotland.

They have four Malamutes and David competes in three separate leagues with two or more dogs. Marco competes with just a single dog – and won the Siberian Husky Club of Great Britain’s Aviemore Sled Dog Rally 2011, a title he hopes to retain in 2012.

Jerry added: “We firmly believe it is important for Eagle Couriers to be involved with the wider community, so we’re delighted to help David and his son, Marco, and we look forward to following their progress in the various competitions they’ll be entering.”

Eagle Couriers has a fleet of 100 vehicles operating from bases in Glasgow, Bathgate and Edinburgh. The team will be working round the clock through the festive period for hundreds of business clients – and the firm has brought in 20 extra staff to bolster its service during the busy period.

The company has almost 30 years experience providing safe and quick logistics services to organisations across the private, public and third sectors, as well as working directly with consumers.

More information about Eagle Couriers can be found at www.eaglecouriers.co.uk