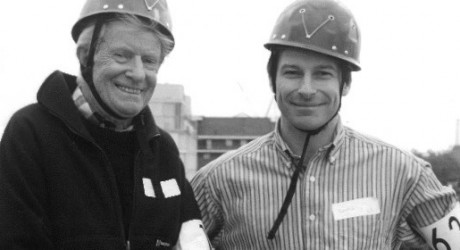 LUKE Hughes has been commissioned by Churchill College, Cambridge to design 400 new chairs to replace the originals in the dining hall, designed by Robin Day.

The funding is largely expected to come from alumni whose generosity will be recorded on brass discs on the rear of the chairs.

The chairs are expected to be delivered in July 2012.

After 50 years, the chairs had finally come to their end of their natural, economic life – not least because of the modern presssures on Cambridge colleges of the conference trade, which greatly increases the ‘churn’ on furniture during college vacations.

“It’s a great honour to be able to build on Robin’s knowledge,” said Luke Hughes.

“Fashions have changed and so have manufacturing techniques and today we have more theoretical understanding of the structural problems of timber stacking chairs – not least thanks to research by Cambridge University Engineering Department, which has had many students from Churchill College.”

The college have remained extremely loyal to architect, Richard Shephard’s 60s vision for the Grade II* buidlings, as well as to retaining the synthesis of the architecture with its furnishings.

Sys a spokesperson: “Luke Hughes got to know Robin Day (who died in November 2010, aged 95) through a shared interest in mountaineering – they met through the Alpine Club.

“Robin was a strong ski-mountaineer, as well as being one of Britain’s most celebrated furniture designers of the 20th century.

“Luke has climbed the North Face of the Eiger and made many exploratory expeditions to Tibet and the Himalayas (see http://en.wikipedia.org/wiki/Luke_Hughes_(furniture_designer).