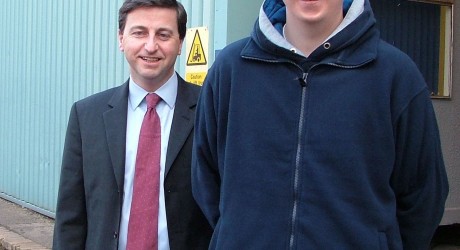 Begins a spokesperson: “The Labour front-bencher and Shadow Foreign Secretary visited the Paisley-based charity and social enterprise to meet 23 year-old Scott Richardson, who was taken off the dole to spend six months on the Kibble Construction job-training initiative.

“And Scott impressed so much, he was given a full-time job as a handyman in the organisation’s KibbleWorks [correct] warehouse.

“KibbleWorks, is the organisation’s employment training wing for young people up to the age of 24 and its businesses include construction; warehousing; joinery; metal fabrication; promotional products; gardening, catering, car mechanics and household goods recycling.”

Douglas Alexander, MP for Paisley and Renfrewshire South, said: “One of the greatest challenges society faces is dealing with unemployment and, in particular, how to deal with youth unemployment.

“I got involved in politics and joined the Labour Party 30 years ago after the closure of the car plant at Linwood and the unemployment that caused in Renfrewshire.

“Sadly, there is still unemployment today – particularly among young people – and we face the spectre of a lost generation.

“The work Kibble is doing to help young people find a job is vital.

“It was great meeting Scott and seeing how the hands-on work experience Kibble had given him has made a difference to his life.”

Scott, 23, from Barrhead said: “If it wasn’t for Kibble, I would still be trying to find a job.

“Working with Kibble Construction showed me there was a whole new world of work out there and then going on to a full-time job at Kibble has changed my life in every way.”