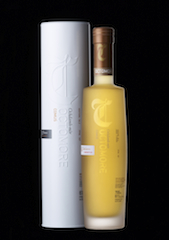 Begins a spokesperson: “Bruichladdich’s Octomore is a über small-scale, cult whisky that out-Islay’s all other Islay whiskies.

“Distilled at Bruichladdich Distillery from barley peated to a legendary 167 ppm, this Islay single malt whisky is at least three times more peaty than any other whisky.

“Owing to the tall Bruichladdich stills and their propensity to produce elegant spirit, this is surprisingly refined whisky – with a whopping peat-smoke bouquet.

“Octomore 4:2 Comus is the latest bottling of this highly sought-after cult whisky. It follows on from Octomore 4:1 released last summer.

“Both are similarly peated, bottled at cask strength, and at five years of age. There. the similarity ends.

“Octomore 4:2 has been further matured in premium-quality French oak casks impregnated with the finest sweet wine known to man, from Chateau Yquem. An unlikely combination. A compelling intrigue.”

The spokesperson continued: “This we have called ‘Comus’ after Greek mythology’s god of excess.

“His was the skill to create sensual, hedonistic and intoxicating potions, ‘orient liquor in a crystal glass’, that could seduce the innocent, the virginal, with wild, sensual orgiastic pleasures.

“Comus, Milton’s 1634 play about the decadent Greek god, is a philosophical discourse about the tension between sensual pleasure and physical abandon, extravagance and moderation, chastity and virtue.

“The result is an ethereal, otherworldly, divine liquor that will drive its fans equally wild.”

“Regrettably, few will ever get to try this extraordinary spirit as only 18,000 bottles are available worldwide at 61% ABV at £100 each.

This bottling released from 14th February will not be widely available.”

MEDIA RELEASE posted by Bruichladdich. You too can post media releases (aka press releases) on allmediascotland.com. For more information, email here.