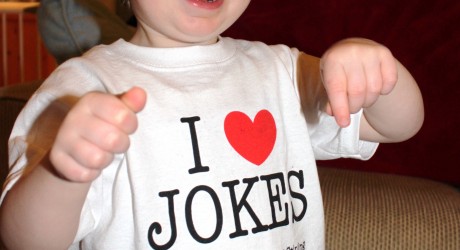 NEW research from the University of Stirling’s Baby and Toddler Lab suggests parents adapt their voices when they are joking and babies expect to see jokes when they hear these voices paired with laughter.

The parental cues study, carried out by Dr Elena Hoicka in partnership with Merideth Gattis from Cardiff University, asked 41 parents to read a book to their 19 to 24-month-old toddlers.

During the research, half of the parents read their baby a caring-themed book with sentences like, ‘Baby loves mummy’s cuddle’, illustrated by a picture of a mother cuddling her baby while being fed a bottle. The other half read a funny book with sentences such as ‘Mummy drinks baby’s bottle’ accompanied by an illustration of a mother drinking from the baby’s bottle.

When parents were being funny, they spoke higher, louder and slower. The pitch of their voices also raised gradually towards the end of the sentence, as though they were asking a question.

Dr Hoicka, lecturer in Psychology, explained: “By speaking higher, louder and slower, parents made the sentences easier for the babies to understand, which might be helpful as jokes contain some very odd ideas.

“However, the parents didn’t want their babies to believe their jokes, so when joking the tone of their voice made the story sound uncertain, like they didn’t really believe what they were saying.”

Adds a spokesperson: “A follow-up study by Dr Hoicka and Professor Su-hua Wang at the University of California, recently published in the Journal of Cognition and Development, discovered that 15-month-old babies used vocal cues to figure out when someone was going to be funny.

“The babies who heard the caring voice looked longer when watching the funny scenario than the caring or normal action. This suggested that the babies were surprised by the strange actions. However, when the babies heard a funny voice they looked longer at the normal versus the funny action. This suggests that babies were actually more surprised by the normal action than the funny action.”

Dr Hoicka added that the findings will be very useful, as humour is an important aspect of life. “It helps to create social bonds, deal with stress, and can even benefit education,” she said.

“We know very little about how humour develops from birth so this study helps answer that question.

“The study also highlights how parent-child interactions are important – not only for children’s humour development, but for children’s understanding of other people’s minds.”

Stirling’s Baby and Toddler Lab is looking for parents with young children, schools and nurseries, to take part in future studies.

The study by Dr Elena Hoicka, in partnership with Merideth Gattis from Cardiff University, will be published in the British Journal of Developmental Psychology.