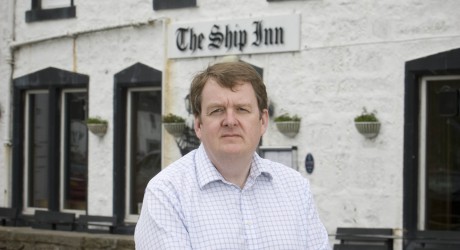 WORK on a major £200,000 ground floor extension is underway at The Ship Inn in Stonehaven, Aberdeenshire.

The investment comes on the back of a very successful period of trading for The Ship Inn, with a 19 per cent increase in room trade and an eight per cent growth in food sales over the past 12 months.

Building work on the new extension started at the end of last year and will result in major improvements to customer facilities.

The main scope of the project is to build new downstairs public area toilets, followed by a complete refurbishment of the bar and lounge areas. The floor space of the lounge will be significantly increased with the removal of the existing toilets. It is expected that the work will be completed by April.

Simon Cruickshank, owner of the 18th century harbour front property, says the latest investment is part of a planned programme of improvement works which has been carried out over the past seven years.

He says: “This is a significant project for The Ship Inn, and one which we have been waiting to undertake for some time.

“The hospitality sector has been put under enormous pressure as a result of the current economic climate, as eating out and holidays are usually the first things to be cut from the household budget.

“However, we are bucking the trend and feel confident about spending more money to make further improvements to our facilities.

“Over the past seven years the floor space of the restaurant has been extended by 50 per cent, and we have increased the number of rooms we have from five to 11, and all of these are en-suite.

“We have done a lot to upgrade the hotel, but the new extension will be significant because it is a piece of work that has been planned for a considerable length of time.

“The increase in occupancy rates is very encouraging and comforting, especially when you consider that 700 additional rooms have been created in Aberdeen in the last two years.

“As a relatively small hotel outside of the city, we were concerned that this could have an impact on us but in fact the biggest increase we have seen is in midweek bookings for the business market. The feedback we have had from some business travellers is that they want to get out of the city to relax.

“July and August were the only months last year which did not perform that well for us, and that could be as a result of the very poor weather that we had during those months.

“However, other months which have traditionally been slow, like September and October, were exceptionally busy across both our food and accommodation offerings. We enter 2012 full of optimism and all the signs are there that the trend for growth will continue this year.”

Built in 1771 The Ship Inn is a cosy coastal haven offering a warm friendly atmosphere with fine dining and exceptional service. The seaside town of Stonehaven is situated on Scotland’s north east coast, 15 miles south of Aberdeen.

To book a table at The Captain’s Table or for further information on The Ship Inn log onto www.shipinnstonehaven.com or call 01569 762617.