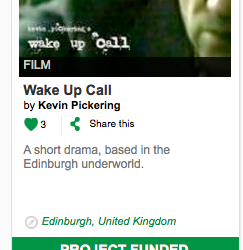 Student, Kev Pickering, became the first in Scotland to crowdfund his new movie, Wake Up Call. He reached his target in just four days, but went on to raise 46 per cent more than his target by the end of the crowdfunding campaign.

Bloom CEO, Amanda Boyle, said Kev’s project was a perfect example of how to pitch and run a crowdfunding campaign.

“Wake Up Call was a great story told well, and Kev put the effort in to make his campaign a success. He reached out to his friends and family first to ask for their support and create a series of fab rewards. Who wouldn’t want to be credited as Executive Produce on a film?

“Kev made the connections, put the effort in and reaped the rewards. This project was one destined to win from the outset.”

Kev is a student at Edinburgh College of Art and this is a sequel to his very first short film, ‘Wake Me Up, 2002′, a character-driven short crime film, based in the Edinburgh underworld.

As a student at Edinburgh College of Arts money is tight and this, Kev’s most ambitious project to date, needed the right funding to reach the widest audience possible.

Kev explains in his pitch why this is so important to him, and he details what he plans to spend the money on; case expenses, make up/effects, costumers, catering, music rights, transport, locations, equipment hire and festival entry fees.

Kev said: “Bloom has been brilliant for me. Raising money for a student film is not easy and asking friends and family for money is never easy either, so being able to point friends and family to a page where they can easily read about the project and see what their money will be used for was really helpful.

“The staff at Bloom are extremely helpful and very accessible. Bloom has really been beneficial to me and my project, ‘Wake Up Call’, and I will definitely crowdfund with them for the next film.”

Still in beta, Bloom VC (Venture Catalyst) has more than 30 exciting new projects in the pipeline, ranging from technology to games, apps, cosmetics, music and another two movies.

Bloom is considered the first crowdfunding platform of its kind in the UK, enabling anyone with an idea, anywhere in the world, to reach out and receive donations from across the globe, using their social networks.

The company was launched to provide an alternative route to finance for start-ups, community projects and social enterprises.

In November, Bloom VC (Venture Catalyst) secured a financial partnership with NESTA, one of the UK’s foremost experts on innovation.

Robert Crawford, director of Innovation, Investment and Growth at NESTA (National Endowment for Science, Technology and the Arts) said they are delighted to support Bloom and look forward to learning from the company’s crowdfunding model.