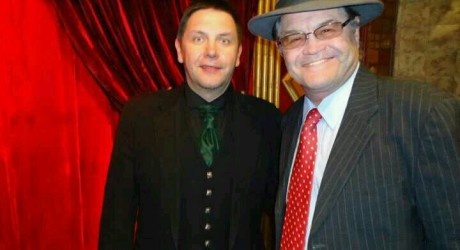 A SCOTTISH bar supervisor has had a magical taste of Hollywood.

Bar supervisor, Gary Middleton, who works at the Birds and Bees in Causewayhead, Stirling, has just returned from Hollywood where he was personally invited to perform close-up magic at one of the most exclusive clubs in the USA in front of a host of Hollywood VIPs.

Gary, from Stirling, was flown to Hollywood at the special request of the Magic Castle Club, an exclusive, members-only magic club, which includes Johnny Depp as part of its VIP membership.

Gary was only one of five UK magicians invited to perform at a week-long residency.

The event was organised by Gary’s friend Paul Wilson, from BBC’s The Real Hustle.

Gary performed his own brand of close-up, sleight-of-hand in front of the great and good of Hollywood, including members of legendary 60s group, The Monkees.

Billed as ‘the most unusual private cub in the world’, the Magic Castle is housed in a 103-year-old fairytale mansion in the heart of Hollywood.

Gary, who occasionally performs sleight of hand tricks for customers, said: “It’s an amazing place. There are five rooms set aside to perform magic, it’s very exclusive. This is the second time I’ve been invited. I’m keeping my fingers crossed I’ll be invited again next year. It was great fun.”

However, Gary’s trip was almost cancelled at the last-minute after a fire broke out in one of the Magic Castle’s performance rooms.

Spookily, the fire began in the Harry Houdini Room on the anniversary of the legendary escapologist’s death.

Thankfully, the fire was quickly brought under control and Gary was allowed to make the trip of a lifetime.