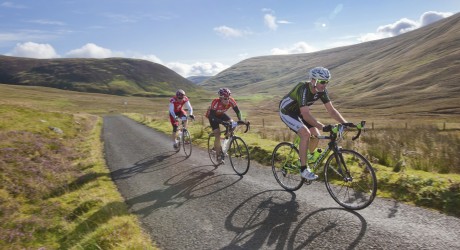 THE ‘Tour o’ the Borders’, a 70-mile sportive in the Scottish Borders, is launched.

A new ‘sportive’ road cycling event that will make the most of the quiet Borders roads in springtime has just been launched. The ‘Tour o’ the Borders’, being staged on Sunday 29 April 2012, is a 70-mile ride starting and finishing at Peebles High School, with some testing climbs as the route traverses four separate valleys within the region.

The ‘Tour o’ the Borders’ aims to establish itself as a spring classic road ride for Scotland. The team behind the Tour o’ the Borders are confident the area has what is needed for a popular new sportive, and with a considerable amount of cycling experience under their wheels, they also feel sure the event will be a winner.

John Anderson of cycle clothing brand RennerSport and a partner in the Bicycle Works, a very successful bike business and racing team based in Edinburgh, has teamed up with Neil Dalgleish, who is responsible for building the TweedLove Bike Festival in the Tweed Valley and also owns leading design and communications business, Hillside Agency.

John Anderson said: “Between us we know a fair bit about the cycling world and I know we can put on a great event. The roads are perfect in the quieter parts of the Borders; there are some cracking big hills and you hardly see a car all day!”

The two organisers, who first met 30 years ago while Dalgleish had a Saturday job in a Peebles bike shop, believe there’s great potential for the new venture.

“Road sportives are becoming increasingly popular, and this part of the country has all the right ingredients to host a top-quality event,” says Neil Dalgleish.

“We can move the course around year by year – there’s so much potential for new routes – and in time who knows, we might build something big like the Etape in Perthshire.”

The Tour o’ the Borders is open to all, and is about participation in a challenge rather than racing. The seven hills included in this year’s course will provide a test for all, but cyclists can ride at their own pace in order to get the most enjoyment out of their day.

John Anderson added, “Sportives like this are not competitive races, though all the riders will have timing chips and will be given their times at the end. It’s more about enjoying the challenge of a big ride with lots of other cyclists in the fantastic surroundings of the Scottish Borders. Most importantly, it will be a very enjoyable day on the bike.”

Full event information is available at The ‘Tour o’ the Borders’ website – http://tourotheborders.com/.

Entries are taken online at the same site, along with helpful advice on how to prepare for the seventy and 112 miles of sweat and smiles.

With thanks to
Scottish Borders Council (http://www.scotborders.gov.uk/)

MEDIA RELEASE posted by Podge Publicity. You too can post your media releases (aka press releases) on to allmediascotland.com. For more information, email here.