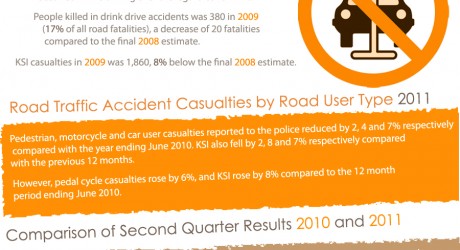 WE all know that any road traffic accident is one too many. However, residents of Scotland can sleep a little easier in the beds knowing that statistically speaking Scotland’s have some of the safest roads within the UK.

Research compiled by road traffic accident solicitors, Pannone, shows that in 2011 the five police regions with the lowest number of road traffic accidents were all in Scotland: Dumfries & Galloway 455, Central 679, Fife 725, Northern 830 and Tayside 967. Grampian has the seventh least with 1,322 reported road traffic accidents. Unsurprisingly, Strathclyde was the Scottish county with most accidents, 5,273 the 12th highest, nationally.

Pannone Solicitors collected data from 50 police forces around the UK to see where the safest, and most dangerous, parts of the UK are. Further good news as pedestrian, motorcycle and car users causalities fell by two, eight and seven per cent respectively from the year ending June 2010.

However, the figures are not all pleasant reading the number of cycle casualties rose by six per cent for the same time period. Despite fatalities increasing seven per cent between April and June compared to 2010, the average number of fatalities dropped in 2009 by 38 per cent compared to the 1994-98 average. The figures are available in a inforgraphic http://www.pannone.com/atoz/road-traffic-accident.

Carol Jackson, serious injury partner at the Manchester-based law firm, said: “It’s great to see that the overall trend nationally is of fewer road traffic accidents, especially the number the number involving children falling by 61 per cent in an 11-year period.”

The firm have also published six tips to ensure safer driving; fasten your seatbelt, keep your hands on the wheel, stay alert and check traffic in all directions, maintain the speed limit and reduce speed depending on the conditions, don’t drink and drive and finally don’t drive whilst on the mobile phone.

Carol added: “Drink driving accounts for 17 per cent of all road traffic accident fatalities. Whilst this number is decreasing it shows there is still to be work to be done in this area.”

It will come as no surprise that the Metropolitan Police, which deals with Greater London, had highest number of reported accidents with a staggering 28,6321 accidents.