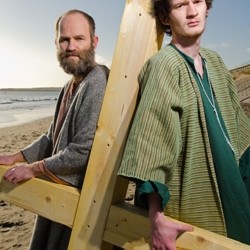 ABERDEEN local, Andrew Sykes, an associate at Shepherd Chartered Surveyors, has written and directed ‘The Aberdeen Passion – One Life Given’, an adaptation of Jesus Christ’s last days – and will star in the role of Judas at the performances over Easter weekend at the Aberdeen Exhibition and Conference Centre.

A traditional Easter Passion play being staged in Aberdeen for the first time in living memory, the amateur production is supported by, and draws its cast and crew from, members of local churches in Aberdeen and the North East.

Begins a spokesperson: “The passion story has been told and retold as a play over the centuries in a variety of styles and adaptations. ‘The Aberdeen Passion – One Life Given’ is a traditional passion play, involving over 100 performers through a blend of onstage action, a live band and choir performing modern songs with lyrics specially written for the production.

“The play is a faithful retelling of arguably the greatest story ever told, drawing its source material directly from the Gospel of St. Luke.

“Those involved are both Christian and non-Christian, drawn together by the amazing story that unfolds over the final few days in the life of Christ.”

Writer, director and actor, Sykes, said: “We decided to use the title ‘The Aberdeen Passion’ as a challenge to us all to establish a regular passion play for the North East of Scotland which was centred in, or around, the City of Aberdeen.

“I wrote the play in 2010, having had the idea to do an Easter play in Aberdeen over ten years ago. I am also playing the part of Judas, and, along with several of the male actors, have been growing a beard!

“As well as the story acted out, there is a live band and choir so that there will be around 100 onstage performers involved. We’ve taken modern songs from the likes of Elbow, Take That and Linkin Park and re-written the words to suit the story.

“This project has been planned for over a year. We have heard that people are coming from all over the North East to see the Passion, as well as further afield and we hope that over 2000 people will see the production.”

The production is being operated on a strictly non-profit basis with all involved, with the exception of some professional support we need to hire in, giving their time and talents free of charge.

The modest ticket price and any donations or sponsorship monies are solely to cover the venue hire and associated costs, music copyright fees and material costs.

Any income to the project over and above this will be distributed between the local charities the production is supporting.

Sykes is an associate in the residential department of Shepherd’s Aberdeen office – so watch out for Judas surveying your home in the near future!

There are three performances of The Aberdeen Passion over the Easter weekend Friday 6th April (7.30 pm) and Saturday 7th (2.30 and 7.30 pm) at the Aberdeen Exhibition and Conference Centre.

Tickets are for sale through the Aberdeen Box Office. More information can be found on the website