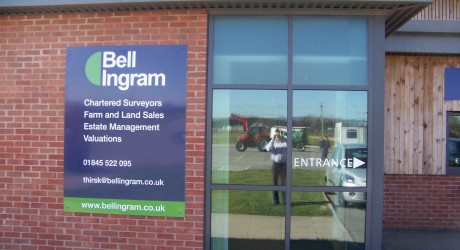 ONE of Scotland’s leading land and property management firms has expanded its Thirsk office after landing a series of new contracts.

Bell Ingram, who provides expert advice on private estates, farming and other land management topics, has invested £14,000 into an expansion of its English office in a move to aid the current growth the firm is experiencing in the area.

Based at the Thirsk Rural Business Centre, the firm took the decision to expand the office space as a response to the number of new contracts over the past three years at the location and saw it as a chance to aid and further develop growth for the company.

Derek Tyson, one of Bell Ingram’s directors based at the Thirsk office, explained the move into the next door unit allowed for more space and the opportunity to modernise their office.

He added: “We needed the extra office space for staff, client meetings and general filing as we were literally bursting at the seams.

“The company envisaged moving into the next door unit for about a year but the opportunity didn’t arise until Christmas last year and the move was finally complete at the beginning of March.

“We’ve been at this business centre for three years now and since then we’ve been lucky to have been contracted to work with two additional fee earners, expanded our portfolio of clients with landing a leading contract with agricultural experts York Potash to build a pipelines across the North Yorkshire Moors.

“There was naturally a lot of moving around and upheaval taking place but thanks to the hard work of our office manager, Beverley Longthorne, who oversaw the organisation of the expansion and the positive attitude of all our staff everyone remained calm and cooperative which really helped.

The expansion has increased the Thirsk office by 400 sq foot of office space and created a more modern office environment.

Derek adds: “A new archway was created through a breeze-block wall connecting the two units into one full internal walling, lining and plastering of the new office area and new wooden flooring throughout were laid.

“Initially tenders were requested from a number of local contractors to complete the works which included building alterations, electrical works and a new telephone and IT system with finishing touches made to complete the look.

“The overall appearance of the new office suite gives a much more professional and efficient presentation of the company.”

Established in 1899, Bell Ingram is a multi-disciplined firm which employs more than 130 professional staff across 11 UK offices. They provide local knowledge with national coverage.