Media Release: The Strange Undoing of Prudencia Hart to tour the UK and internationally 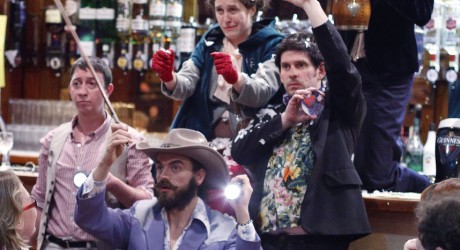 FOLLOWING on from its phenomenal success and critical acclaim, both on tour and at the 2011 Edinburgh Festival Fringe, The National Theatre of Scotland’s The Strange Undoing Of Prudencia Hart is touring to village halls throughout Scotland from 10 April 2012; visiting Blair Atholl, Nethy Bridge, Edinburgh, Torry, Kippen, Crianlarich, Kilcreggan, West Kilbride, Carlops and Kelso; with an opening performance at the Adam Smith Theatre, Kirkcaldy on Wednesday 11 April.

The production will also appear at UK festivals; including the Norwich and Norfolk Festival, Mayfest, Bristol and the Brighton Festival.

The Strange Undoing Of Prudencia Hart will then tour the UK and internationally until 2013.

Full tour details to be announced.

The original cast and creative team have reunited for this year-long tour.

PUTTING THE DRAM INTO DRAMA

Benromach Single Malt Whisky is delighted to announce that following their successful partnership with National Theatre of Scotland and their support of the production at the Edinburgh Festival Fringe, they will be back on board to sponsor the Scottish leg of the 2012 tour.

Their sponsorship is part of Benromach’s venture into the arts and will enable each audience member in Scotland (18 years and above) to share a dram of Benromach Whisky during the show.

David Urquhart, joint managing director of Gordon & MacPhail, owners of the Benromach Distillery in Forres, said: “We’re excited to be continuing our sponsorship of the arts as The Strange Undoing of Prudencia Hart grows in popularity across Scotland and the rest of the UK. It’s a pleasure to be associated with such an individual and artistic performance, which we feel reflects many of the distinctive qualities of the various expressions of our malt whisky.”

One wintry morning Prudencia Hart, an uptight academic, sets off to attend a conference in Kelso, in the Scottish Borders. As the snow begins to fall, little does she know who or what awaits her there. Inspired by the Border Ballads – and delivered in a riotous romp of rhyming couplets, devilish encounters and wild karaoke – Prudencia’s dream-like journey of self-discovery unfolds among and around the audience.

The Strange Undoing of Prudencia Hart takes theatre into pubs and other unlikely venues, where stories are told, re-told, sung and passed on. Audiences are invited to share a lock-in with the National Theatre of Scotland’s company of actors and musicians and to indulge in an evening of supernatural storytelling, music and theatre inspired by the Border Ballads, Robert Burns and the poems of Robert Service.

“The bare rolling stretch of country from the North Tyne and Cheviots to the Scottish southern uplands was for a long time the territory of men who spoke English but had the outlook of Afghan tribesmen; they prized a poem almost as much as plunder, and produced such an impressive assembly of local narrative songs that some people used to label all our greater folk poems as ‘Border Ballads’.” AL Lloyd, ‘Folk Song in England’

The National Theatre of Scotland sent writer David Greig, director Wils Wilson and composer Alasdair Macrae to an old pub in the Scottish Borders for the weekend, to research the Border Ballads for a new piece of theatre.

It was the coldest winter for many years. Maybe it was the unique atmosphere in the pub that night, or maybe it was the knee deep snow outside, but no-one wanted the evening to end, so at midnight the Landlord closed the doors and they found themselves ‘locked in’.

Deep, in the wee hours, one old man told a story about another group of people who’d come to look for songs a few years back and of how one of them, a woman, had never after been seen again. It was a story, which he said was ‘one hundred and ten percent true’ a story of love, of music and of the Devil.

This was the inspiration for The Strange Undoing of Prudencia Hart.

The Strange Undoing of Prudencia Hart originally toured Scotland in February 2011 subsequently playing at Latitude Festival, Òran Mór, Glasgow, and the Edinburgh Festival Fringe in August 2011. The production has won two awards, a Critics Award for Theatre for Best Music and Sound and a Herald Angel.

David Greig was born in Edinburgh, studied at Bristol University and is a highly-respected playwright and theatre director. In 1990 he co-founded Suspect Culture Theatre Group with Graham Eatough in Glasgow. David’s recent work for the National Theatre of Scotland includes Dunsinane (RSC), Peter Pan and The Bacchae (EIF). Other theatre work includes Midsummer (Traverse Theatre and Soho Theatre), Creditors (Donmar Warehouse and BAM) and The American Pilot (RSC, Soho and MTC). He is currently working on a new Broadway production of Charlie and the Chocolate Factory.

Wils Wilson’s directing work for National Theatre of Scotland includes Gobbo – The Adventure of Gobbo and The Watchmaker devised and created with David Greig and Home Shetland created with Jackie Kay. Both productions won CATS Awards. She was co-founder and Co-Artistic director of Wilson+Wilson creating site-specific art, installation and theatre. Wils’ other work includes productions with Manchester Royal Exchange, Live Theatre, Bolton Octagon, Gate Theatre, Midsommer Actors and BBC Radio Drama and future projects include The Manchester Lines, a site-specific play with songs for the Library  Theatre Company, Manchester, written by Jackie Kay and composed by Errollyn Wallen in June.

Annie Grace, singer/instrumentalist/actor, originally from Fort William was a member of the group Iron Horse and regularly performs with her own trio. She has recently appeared in Pinocchio (The Arches), Jacobite Country (Dogstar) and Peter Pan (National Theatre of Scotland).

David McKay’s last appearance with the National Theatre of Scotland was in Aalst (at tramway, Glasgow, Soho Theatre London and UK and International Tour). Television and film credits include Shoe Box Zoo, Taggart, Looking After Jo-Jo and Rab C Nesbit (BBC) and Ken Loach’s Ae Fond Kiss and My Name is Joe.

If you would like to arrange a press ticket for any performance during the tour from Wednesday 11 April at Adam Smith Theatre, Kirkcaldy, please contact: Liz Smith, on daisy.ben@live.co.uk or 07971 417210.

1. The National Theatre of Scotland is supported by the Scottish Government.  Since its launch in February 2006, the National Theatre of Scotland has been involved in creating over 160 productions in 125 different locations. With no building of its own, the company takes theatre all over Scotland and beyond, working with existing and new venues and companies to create and tour theatre of the highest quality. It takes place in the great buildings of Scotland, but also in site-specific locations, airports and tower blocks, community halls and drill halls, ferries and forests. The company has performed to over 710,000 people, across three continents.  www.nationaltheatrescotland.com

2. Benromach and the National Theatre of Scotland are committed to promoting responsible drinking messages within the sponsorship of The Strange Undoing of Prudencia Hart in accordance with the guidelines provided by the Scottish Government document, ‘Alcohol Sponsorship Guidelines Scotland’.

3. Established in 1898, Benromach distillery changed hands many times and was virtually derelict when bought by Gordon & MacPhail in 1993. Drawing on generations of whisky expertise, the company carried out a painstaking refurbishment, and the distillery was officially re-opened by Prince Charles in 1998. Just two men hand-craft Benromach using the finest Scottish barely and the purest spring water from the nearby Romach Hills. They fill new spirit into the highest quality casks before being left to mature at the distillery for many years. The Benromach portfolio includes the award-winning Benromach 10 Years Old and the first fully certified organic single malt – Benromach Organic.

Tickets:  available from the venue £8/£6

Carlops Village Centre on Wednesday 2 May at 7.30pm

Aberdour Hotel, Dumfries Thursday on 31 May at 7.30pm

The Buccleuch Centre, Langholm on 1 June at 7.30pm

Norfolk and Norwich Festival from 11-13 May http://www.nnfestival.org.uk/

Mayfest, Bristol  from 17-27 May http://www.mayfestbristol.co.uk/

Brighton Festival from 22-27 May http://brightonfestival.org