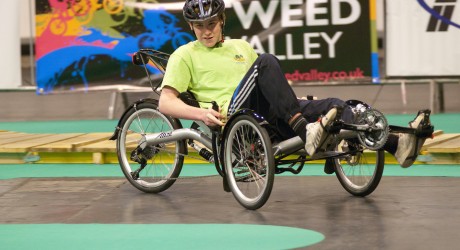 THE Scottish Bike Show, Scotland’s consumer cycle show, returns to the SECC, Glasgow, from Friday 13 to Sunday 15 April 2012; this year with an extra day, a stronger line-up of brands and exhibitors, bike launches and the first Scottish Bike Show Sportive.

With less than three weeks to go excitement and anticipation is building amongst Scotland’s growing cycling community – road, mountain bike, bmx, leisure riders and commuters – for this hugely popular cycle show that saw more than 5,000 people from all over the UK visit in 2011.

Whether you’re a cycle commuter, you ride and race on trail, track or road, you simply enjoy a bike ride at the weekend with your family and friends or you are a curious newcomer, The Scottish Bike Show 2012 has something for everyone.

Big names brands and the specialists:

* Onix, one of the UK’s fastest growing on-line retailers of Carbon Bikes and Components, will showcase their new Rob Hayles Signature Range of road bikes.  It is the first time that Onix have exhibited at a cycle show.

* nrg4, a leading UK distributor, will be showcasing the new MSC Blast Carbon mountain bike that has just won the D&I Award for Best Bike at the Taipei Cycle Show, considered to be Asia’s biggest bike show.

* Hooked on Cycling have just announced a £250K bike sale at the Scottish Bike Show, across big name brands including Scott, Colnago, Cube, Mekk, Sabbath, Merckx, WTP, GT, Mongoose and Verde; all supporting some incredible deals. They will also be showcasing the Eurocar Colnago C59 team bike as ridden by Thomas Voeckler in the 2011 Tour de France.

* Thomsons Cycles have teamed up with Merida who will be bringing their UK race truck and will be showcasing their 2012 mountain bike range that includes the Big.Nine Carbon Team, The Big Nine Team D and the Ninety-Nine Team D; with some special Bike Show offers on selected 2011 models too.

* Walkers Cycling will be bringing the Ridley Noah, said to be ‘the fastest bike in the world’, that has a starting price of £7,500, together with the latest Tacx Genius cycle simulator.

* Alpine Bikes, a main sponsor of the Scottish Bike Show, will have one of the largest stands, exhibiting a huge range of brands and other apparel including Trek bikes.

* Scottish manufacturers at the show hand made bikes from Paper Cycles and bespoke bike wheels from Wheelsmith.

* For a full list of exhibitors and brands, go to: http://www.thescottishbikeshow.com/exhibiting/who-is-exhibiting.html

* BSD BMX stunt team will amaze visitors with gravity defying aerial stunts and tricks all weekend. Rockstar Energy Drink have sponsored the jam sessions and displays and Christian Hatcher, 44 Racing Rockstar MTB team owner and rider will be at the show with a number of other Rockstar Energy Drink athletes.

* The family friendly indoor forest track, ‘an all in one cycling experience allowing visitors to have a go at biking and experience some great trail features in a safe and fun environment’ has been expanded for the 2012 show.

* There will be opportunities to test ride brand new bikes on a flat city style track, with just a few obstacles!

* A huge range of cycling challenges and competitions to win bikes, vouchers and cycling gear with many special Bike Show promotions and deals. This includes Scottish Cycling’s Watt Bike Challenge, where four friends can race each other for ultimate glory and prizes.

* Robert Wiseman Dairies will be promoting the fresh ‘n’ lo Pedal for Scotland Sportive and Challenge Ride, Scotland’s biggest bike ride, and giving away milk to visitors to their stand.

* The Scottish Bike Show Sportive, a new long-distance mass participation cycling event with two routes (100 and 65 mlles) through the stunning countryside of the Loch Lomond and The Trossachs National Park on Sunday 15 April. All riders taking part get free entry to the show.

The leading national and community cycling organisations – including Scottish Cycling, Cycling Scotland, Sustrans, CTC, Developing Mountain Biking in Scotland, Highland Perthshire Cycling, Glasgow Sport and The Bike Station – will all be on hand to promote their joint vision for Scotland to be a nation of cyclists, through leisure and competitive cycling.

There will even be advice from Cycle Law Scotland for those cyclists who have been involved in road traffic accidents.

This year, The Scottish Bike Show organisers have partnered with Common Wheel, a charity that provides meaningful activity for people with mental illness, through working with bicycles and music; and The Cystic Fibrosis Trust.

The Prostate Cancer Charity is the official charity for The Scottish Bike Show.

Whether you’re a cycle commuter, you ride and race on trail, track or road, or simply enjoy a bike ride at the weekend with your family and friends there will be something for everyone at The Scottish Bike Show 2012 at The SECC.

“With a fantastic lineup of both new and returning exhibitors from the big name brands to the small specialist manufacturers and cycling organisations; amazing entertainment from the BSD BMX display team, an expanded forest track and loads of competitions and challenges this is a show for all cyclists of all disciplines and skill levels.”