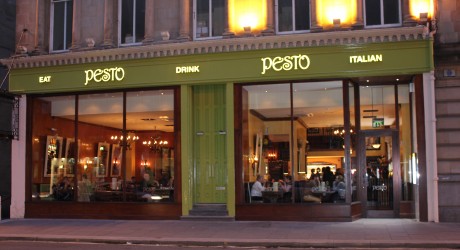 GLASGOW restaurant, Pesto, has been nominated for a top award – only six months after opening for business.

The privately-owned, 300-seat restaurant is a finalist in the ‘New Restaurant of the Year’ category at the Scottish Entertainment Guide Awards 2012.

“We are very pleased to be in the running for such a prestigious prize,” said general manager, Francis Carr.

“The nomination says a lot about the hard work of everyone at Pesto to make the restaurant a success with its innovative approach to Italian cuisine.

“We came ahead of 2,000 other restaurants to win a short-list place so now we eagerly await the judges’ final decision.”

Owners, Neil Gatt and Sara Edwards, hate being ripped off in restaurants that charge fancy prices but don’t deliver on the food or service so they set out to give customers great value for money through freshly cooked food in a warm relaxed atmosphere.

“Sara and I love Italian food, but just not in traditionally large portions of one dish,” said Neil.

“We hit on the idea for Pesto where you can order five or six dishes between two diners and enjoy a selection of different tastes in one meal.

“We are pleased with the progress of Pesto in Glasgow and, obviously, excited to be considered for this award such a short time after opening up in the city.”