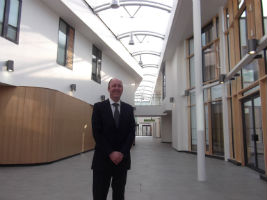 A STATE-of-the-art health facility with a space age roof and self-generating power supply is set to wow the people of East Lothian.

The pioneering new Musselburgh Primary Care Centre has been completed on-time and to budget.

The keys were officially handed over to East Lothian Community Health Partnership (CHP) by contractors, Dawn Construction, on site on Tuesday 27 March 2012.

David Small, general manager, East Lothian CHP, said:  “It’s very exciting to take possession of this brand new centre and I’m confident that the local community, as well as staff and patients, will be delighted to have this modern, high-quality healthcare facility on their doorstep.

“The building has been built to the highest standard being extremely efficient and economical.”

The new building boasts a number of green credentials, including a combined heat and power plant which generates approximately ten per cent of its own electricity.

“The roof has been specially designed from technology originally developed by NASA,” David Small continued. “It’s held up by compressed air and is self cleaning. The building also has an eco-friendly sedum roof which will attract different types of wildlife onto the site.

“Each room in the building, apart from the storage cupboards, have windows which can be opened reducing the need for air conditioning systems while the building has an under floor heating system saving on space.”

Eddie Robertson, construction director, Dawn Construction, said: “There has been a lot of hard work by our site management team to complete this project, a real partnership was formed with NHS Lothian and their designers and was undoubtedly a significant positive factor in bringing the new Primary Care Centre to life.

“We are proud not only of what we have delivered for NHS Lothian but also in how we managed the sensitivities of the project.”

Staff and services will move into the building over the next few weeks and the centre will open to all patients by the middle of May.

The Musselburgh Primary Care Centre, extends to 6312.5 square metres and boasts a state-of-the-art roof. The modern, self-cleaning atrium roof provides enhanced light throughout the boulevard and reception area which includes the entrances from Church Lane and Inveresk Road.

MEDIA RELEASE posted by NHS Lothian. You too can post media releases (aka press releases) on allmediascotland.com. For more information, email here.