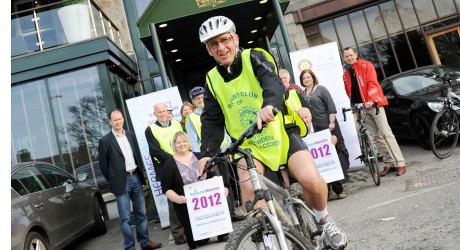 A LEADING global communications company has thrown its weight behind an annual Aberdeen event which aims to convert pedal power into cash for good causes.

Hermes Datacomms – which recently announced its first appointment in Aberdeen – has become the main sponsor of the Bon Accord Bike Ride 2012 which will take place in and around Aberdeen’s Hazlehead Park on Sunday, May 20th from 11am.

The event offers three routes for cyclists of all abilities, from an one-mile children’s route to a seven mile journey and a more challenging 22-mile circuit through the Aberdeen and Aberdeenshire countryside.

The Bon Accord Bike Ride was founded in May 2005 by the Rotary Club of Bon Accord and quickly became a popular annual event which has attracted hundreds of riders and raised more than £24,000 for charity over the years.

This year’s beneficiaries will be Aberdeen Foyer, UNICEF and Rotary’s own charitable organisation, Rotary International.

Other sponsors of the event are Duncan & Todd, William Wilson and Riverside Chiropractic.

Commenting on Hermes Datacomms’ involvement, Aberdeen-based sales executive, Sam Murray, said: “We felt it was important that this worthwhile event received sufficient funding to cover its running costs in order to maximise the amount of money being handed over to the nominated charities.

“As a locally-based company with a global presence, we are delighted that both Aberdeen and international organisations are to benefit from the Bike Ride.”

Rotary Club of Bon Accord founder member and Bon Accord Bike Ride co-ordinator, Colin Reid, added: “We are delighted to have the support of the local business community in maintaining this popular event and ensuring that the enthusiastic cyclists who participate can help us support our nominated charities.”

The Rotary Club of Aberdeen Bon Accord was established in 2004 and is one of Aberdeen’s newest Rotary Clubs and the only one to hold weekly breakfast meetings.

These take place at the Cults Hotel between 7.15am and 8.30am and new members are welcome.

To find out more, visit www.bonaccordrotary.com

To find out more about the Bon Accord Bike Ride 2012, visit www.bonaccordbikeride.co.uk