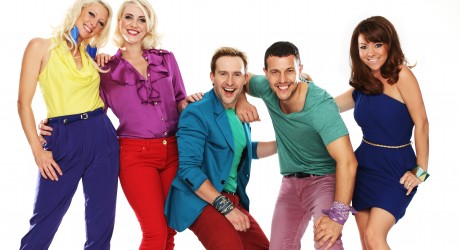 With global icon, Sir Tom Jones, already announced to sing live at the venue on July 6, management have moved swiftly to secure another two major acts for a super-pop concert the following evening – Saturday July 7.

For Steps, it will be the latest stage of an amazing comeback which includes the band’s popular Reunion documentary on Sky Living, now chronicled in a second series, and a sell-out 22-date UK tour in April. The band will perform a full tour set, including hits from The Ultimate Collection including One for Sorrow and Last Thing On My Mind.

Also on the bill on July 7 will be the Australian singer and celebrity Peter Andre who will again roll back the years to belt out some of his biggest hit songs such as Mysterious Girl, Insania and Flava.

Tickets for the event start at just £30 and go on sale tomorrow (Friday, April 6).

Hamilton Park chief executive, Vivien Kyles, said: “This is the perfect pop package for music fans of all ages – it would be a Tragedy for them to miss out.

“Adding another two major names in Steps and Peter Andre to a weekend which will be kicked off by Tom Jones means we are providing a genuinely unique menu of music within little more than 24 hours.

“Going by the popularity of Steps’ UK tour and TV series, Peter’s loyal fan base and ticket prices starting at just £30, we expect pop fans will flock in their droves to Hamilton Park Racecourse to see these two fantastic acts perform during the first weekend in July.”

This second (double-header) signing is a yet another incredible capture for Hamilton Park and builds on the continued successful working relationship the team at the racecourse has with Liz Hobbs Group.

Together, over the last two consecutive summers, both Hamilton Park Racecourse and Liz Hobbs Group have enticed major box-office musical acts to perform live at the venue.

Previous guests from the UK music scene to take to the state at the racecourse have included JLS, The Wanted and Westlife, helping generate capacity crowds and unforgettable gigs at the Lanarkshire venue.

Tickets for the concert start from an incredible £30 and are available from today via:

Issued by The BIG Partnership on behalf of Hamilton Park

This year not only marks the tenth year since their infamous split, but also celebrates the reunion and announcement of a UK arena tour of pop phenomenon Steps. The band who sung their way to success in the 90s soon became a household name as their dance routines and catchy lyrics captured the hearts of fans all around the world.

The announcement of their 2012 UK tour has been welcomed by an ever-growing fan-base, seen their Twitter following triple in figures & the Ultimate Collection album to reach Number 1 on the charts on the first day of release. STEPS’ return to the live arena will undoubtedly be a highlight of 2012.

The reaction from fans has been incredible (seven shows already sold out) displaying their dedicated affection for the band through all social networking sites. The band are excited to be touring again, and on the day of their first live TV performance together since 2001 on ITV’s This Morning, Lee Latchford-Evans stated ‘It just feels right to be performing together again’.

Formed in 1997, Steps were the Pop Sensation of the Millennium. In total the five-piece have sold 20 million records, and achieved 14 consecutive Top Five singles. They have won countless awards and had sell out tour after sell-out tour all over the globe. They were the second most successful British pop group ever (behind the Beatles).

The group is made up of members Faye Tozer, Ian ‘H’ Watkins, Lisa Scott-Lee, Lee Latchford Evans and Claire Richards. Having all attended an audition through The Stage Newspaper in 1997, the five starlets instantly formed a musical connection: and Steps was born.

After an initial success with their first single “5,6,7,8”, the group signed to Jive Records after the involvement of Pete Waterman, who launched their second single, ‘Last Thing On My Mind’ which gained an impressive No.6 chart position and marked the start of their on-going UK success.

By August 1988, Steps continued to establish themselves with the release of their third single ‘One For Sorrow’ which peaked at No.2 in the chart, marking the beginning of a chain of 14 consecutive Top Five hits on the UK singles chart. This, along with the success of their debut album ‘Step One’ led onto a run of 50 weeks in the Top 20 alone.

The next single release provided Steps with their signature song and biggest single seller to date. The cover version of the Bee Gees’ ‘Tragedy’ was paired with an original track “Heartbeat” and released in November of 1998. The single sold over a million copies and occupied the chart for 30 consecutive weeks, along with signature dance-moves that became a loveable trend between fans.

Having established a huge fan-base of teens and adults alike, Steps quickly became a household name during the late 90s. As the group began touring the world, doll figurines of the members aligned store windows, along with Steps Advent Calendars, T-Shirts, and even Heinz tins of edible Steps pasta shapes. Steps were huge, and continued to grow, leaving a trail of adoring fans behind them with every dance move they made.

In March 1999 Steps went on to become part of the ensemble that released. ‘Thank ABBA for the Music’, a medley of ABBA’s top hits as performed on the BRIT Awards in the March of that year. The ‘Supertroupers’ group were nominated and were successful in winning Best Newcomer, as voted by listeners of BBC Radio 1.

That Summer Steps released the first single of an all-new album, ‘Love’s Got a Hold on My Heart’ before heading off to support Britney Spears on her 1999 ‘Baby One More Time Tour’.

‘Step One’ having spent five weeks in the US album chart was followed by Album ‘Steptacular’. The album charted at yet another No.1 and became their second UK million selling album. The group’s next two singles continued to be a storming success, with ‘Say You’ll Be Mine/Better The Devil You Know’ and ‘Deeper Shade of Blue’ continuing their Top Five run of the UK Chart. Having been regular guests on TV Show Smash Hits throughout their career, the group then went on to present the Smash Hits Poll Winners Party to round up yet another successful 12 months together.

After being awarded a second BRIT Award for Best Selling Live Act of the year in 2000, ‘Stomp’ became their second and final number one single. In 2001 the group decided to part ways; however, ten years later, they have reunited in 2011 and the love for Steps is still as big as ever. Their four-part Sky documentary. ‘Steps Reunion’, has had the highest viewing figures of any Sky show this year. Their Ultimate Collection flew straight to number one in the official album charts and the tickets to their national tour sold over 80,000 before they even went on sale.

Here’s to a Steptacular tour and another ten years of Stomping success.