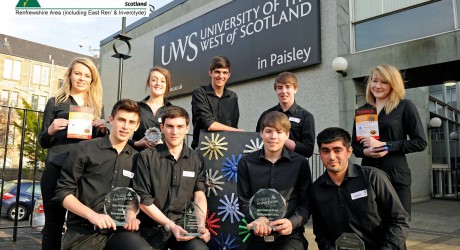 AT the end of March 2012, Young Enterprise Scotland (YES) Renfrewshire Area, held the finals of its annual ‘company programme’ at the University of West of Scotland, Paisley Campus, with a total of 15 teams competing from secondary schools across Renfrewshire, East Renfrewshire and Inverclyde.

The company programme runs from August to March for final year pupils, who form teams and market a real product or service having to deal with all the aspects of setting up and running a real business such as managing people, strategy, marketing, finance and production, etc.

Each team is supported by an experienced business advisor and a link teacher. The event is launched at Reid Kerr, followed by a Trade Fair at Braehead and the area finals in March. During the year, the teams have to raise capital to fund their projects, and do this in various ways such as holding events at their school.

The company programme is run by a volunteer board who manage the whole process.

The programme would not be possible without the support of our local sponsors who for the 2011-12 year were:

The teams that took part in the finals were:

The Board of YES Renfrewshire would like to take this opportunity to thank all the teams and schools for taking part, and also the business advisors and link teachers for their support and encouragement, all our sponsors – without their support, it would not be possible to run the programme. And also to our speakers and finals judges for their time and support.

The YES Renfrewshire Board commented: “The standard increases every year and everyone involved was impressed with the energy and dedication shown by the teams – each showing true entrepreneurial spirit.”

Good luck to Tick Wick from Mearns Castle who now go forward to represent the YES Renfrewshire Area in the Young Enterprise Scottish Finals in June.

For more info about YES Renfrewshire and to view photos of the finals please visit the facebook page at www.facebook.com/yesrenfrewshire