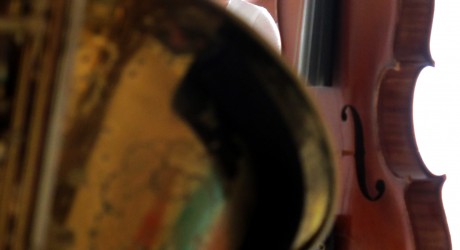 THERE’S more to Iceland than volcanoes and disrupted flights and you have a chance to find this out at Northern Streams 2012.

FUNI (Icelandic word meaning fire), are Bára Grímsdóttir and Chris Foster, who have taught across the world and run the first degree level course on Icelandic traditional music at the Icelandic Academy of the Arts.

Their performances and workshops will cover the unique Icelandic tvísöngur harmony style, Iceland’s two traditional instruments the Íslensk fiðla and the langspil, and the song dances of the island, coupled with beautiful photographic projections.

Come and explore the heritage of this fascinating North Sea neighbour.

Sharing the bill with FUNI are a number of other award-winning acts from across Scandinavia and Britain.

Duo Jens Ulvsand (on bouzouki) and singer Jullie Hjetland have won seven Danish Music Awards between them through various projects and bands.

Rannveig Djønne has been twice a Norwegian champion on the accordion and will be appearing with singer/ fiddler/guitarist, Annlaug Borsheim.

Karin Ericsson Back and Maria Misgeld (Sweden) will be sharing their knowledge of songs around the North Sea both with adults and children. Kim André Rysstad will be teaching Medieval ballads, lullabies, and ‘stevs’ – four lined verses unique to his home area of Setesdal in Norway, and working with hardanger fiddler, Lajla Buer Storli.

The festival’s ninth year offers even more with a new concert and singaround added to the programme on the Sunday afternoon, plus more workshops for children taking place at the Scottish Storytelling Centre on the Royal Mile and The Pleasance.

Northern Streams co-organiser, Fiona Campbell, said: “I’m pleased that we have been able to arrange such a high calibre line-up again to offer audiences and participants in Scotland this year.

“Especially being able to bring Icelandic traditional culture to the festival along with a strong singing strand for the many singers who attend and participate in our events.”

Northern Streams 2012 will take place 13-15 April in venues in Edinburgh.

Further details on the concerts, workshops and sessions taking place are at www.northernstreams.org or on Twitter: @northernstream1 and Facebook: TMSAEdinburghandLothians

We have included the following listing information and details of performers below in Northern Streams Festival 2012 so you have it all in one place:

1.30-3.00pm: 1. Harmony in North Sea area songs with Karin Ericsson Back and Maria Misgeld (Sweden) OR

2. Harmony in music with Daniel on saxophone and Emma Reid on fiddle (Sweden/Britain).

Scottish Storytelling Centre, Royal Mile, Edinburgh EH1 1SR. £5 each child (Free to adults accompanying children – children must be accompanied by an adult!). Suitable for all levels.

10.15-11.30am: Discover mouth music or ‘diddling’ with Swedish singers, Karin Ericsson Back and Maria Misgeld (all ages).

2-3.15pm: Explore Iceland through its songs and dances with FUNI – a workshop many children have enjoyed across the world (minimum age 6 years).

There’s more to Iceland than volcanoes and disrupted flights! FUNI introduce you to the unique music, instruments and song dances of Iceland, coupled with beautiful photographic projections. Come and explore the heritage of this fascinating North Sea neighbour.

Your final chance to hear performers from the Northern Streams Festival followed by the opportunity for you to join in as a singaround. Tea, coffee and biscuits too!

Plus a ‘bonus’ event on Sunday 15 April evening – an intimate houseconcert at Douglas’s. For more information contact Douglas on info@douglasinscotland.co.uk. Tickets are usually only available on the door (This concert is not covered by the Weekend ticket as it is a separate event).