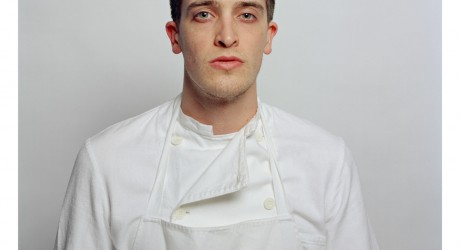 THE Institut français welcome Gerard Jefferson-Lewis, a Master of Arts Photography Graduate from the University of West London (2007), for a showcase of work from his practice-led research degree nearing completion at the University of Edinburgh, Edinburgh College of Art.

‘Untitled’ (Butcher Boys) shows a series of four portraits, each being a large scale triptych consisting of three individual photographs produced with a large format camera.

The models are people the artist had randomly met around Edinburgh and are all between the ages of 18-24 – a period of time when the face is constantly changing.

Says a spokesperson: “His large-scale triptych of portraits of male youths explores the ‘instability of identity’ in a portrait where the youthful individuals from a privileged background are dressed up and stripped of their resonance, then photographed gazing blank-faced into a large format camera lens.

“These anonymous typologies are then displayed as spectacle on a gallery wall and offer a vague and voyeuristic narrative which competes for attention and explores the space which exists in visual representation between a still image and a moving image.

“This work appears puzzling as it draws comparisons with early uses of the plate camera by repressive institutions to document criminals and the insane.”

The ‘Untitled’ (Butcher Boys) exhibition is the culmination of Jefferson-Lewis’ part-time practice led research degree at the Edinburgh College of Art.

Jefferson-Lewis’ research explores a prominent and distinct style of contemporary photographic portraiture which has become established of late under the semiotic term, ‘Blankness’.

His work engages with debate around the decay of the portrait and is partly inspired by photographers from the Dusseldorf Academy in Germany and French philosopher Roland Barthes.

Gerard Jefferson-Lewis will take part in an artist’s talk at the Institut français on Wednesday 25 April, 7.00 pm.

Admission is free but booking is recommended.

More information on the artist is available on www.gerardjeffersonlewis.com

For interviews, HD photos or to attend the preview, please contact us: pr@ifecosse.org.uk

About the Institut français d’Ecosse:

The Institut français d’Ecosse exists to promote French language and culture in Scotland, by providing French courses and organising events (film screenings, talks, exhibitions, concerts, etc.). It is also its aim to encourage cross-cultural exchange between France and Scotland, in cooperation with Scottish Francophile institutions.

After a year of cultural exchanges between Brittany and Scotland in 2011, the Institute surfs on the Olympics wave in 2012, giving a sporting flavour to its cultural programme entitled ‘La Tête et les Jambes’.