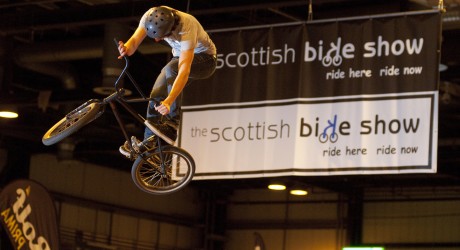 For a taste of the 2012 Scottish Bike Show BSD BMX stunt team riders, including UK legends Kriss Kyle and Chaz Mailey, will be performing gravity defying aerial manoeuvres high above Graeme Obree  – ‘The Flying Scotsman’, as he opens the show.

The BSD BMX stunt display team, who will be sponsored by Rock Star Energy Drink during the show, will perform jaw dropping BMX displays and jam sessions including Kriss Kyle’s speciality move, the flair, a 180-degree backflip, all weekend.

It is hoped that Graeme Obree will also pose for photos with the Ridley Noah FAST FB, considered ‘the fastest bike in the world’, that has a starting price of £7,500, on the Walkers Cycling stand.

There will be loads of other opportunities for photos at the show – see information below.

Rowan Mackie from Magdala Media Ltd, organisers of the Scottish Bike Show, will be available for interview and photos, together with the BMX stunt riders and the show’s exhibitors and national cycling organisations.

For more information on the Scottish Bike Show 2012 go to http://podge.co.uk/the-scottish-bike-show-returns-in-april