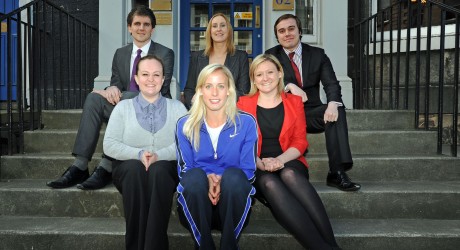 TALENTED athlete, Lynsey Sharp, has shared the ultimate motivational secret that helps her pursue a punishing international sporting career and a gruelling law degree – being cruelly written off while injured.

The 21 year-old is one of the UK’s top 800m runners and hopes to clinch a place in the 2012 Olympic Squad, as well as aiming for the 2014 Commonwealth Games and is now getting back close to her best after injury forced her out of competition for a year.

Just hours after returning to Scotland from a training camp in Portugal, the Edinburgh-based track athlete has given insight into how she maintains her focus and discipline.

During a special coaching session for a group of trainee solicitors at legal firm Balfour+Manson, Lynsey said: “For an athlete, being injured is the worst thing that can happen. When I was out for almost a year it was made even worse because I also lost my UK Athletics funding.

“I was already down about that, when I was told by someone highly influential in the athletics world that I was a ‘lost cause’. I was hurt and angry, but I tried to turn it into a positive.

“I’m now more determined than ever. Standing on the podium at the 2014 Commonwealth Games would be the ideal way for me to show how far I have come since then.”

The elite runner’s dedication involves a strict diet, a seven day training regime, 8am starts and a ban on alcohol and late nights. Now in her final year of a law degree at Napier University, Lynsey told the trainee solicitors how the will to win helps overcome the temptations of student life.

She also insisted the backing of sponsors, including Balfour+Manson which has supported her since she was 11 years-old, was crucial to helping her achieve the right mindset.

The Scottish Athletics’ Athlete of the Year in 2011, added: “When I see friends out partying I have to stay focused.  That’s when I remind myself that I’ll have my whole life to party, but I’ve only got a few short years to achieve my sporting dream.

“I’ve already put in a decade of training and effort into my goal of winning international gold. That is usually motivation enough. At other times the support of my friends, family and sponsors like Balfour+Manson reminds me why I am doing this.”

Lynsey, whose parents Cameron Sharp and Carol Lightfoot both competed for Scotland in the Commonwealth Games, agreed to give the motivational talk as a thank you for the support she has received from Balfour+Manson.

The long established firm, which celebrates its 125th anniversary, next year, runs a sought-after traineeship. As part of a two-year training programme, young solicitors undertake a wide range of events aimed at helping them develop both personally and professionally.

Pamela Lawson, one of the trainees, said: “Having completed my law degree a few years ago I remember the pressures and volume of the work involved. The fact Lynsey combines that with an international track career is amazing.

“It was really inspirational to hear her talking about her training and a reminder of what is possible when you set yourself goals and find the discipline to keep pushing for them. In Lynsey’s case she has shown that having the determination and making certain sacrifices can be well worth it.”

Balfour+Manson partner Andrew Gibb, has known the Sharp family for many years and originally arranged for the firm to become the young athlete’s first sponsor.

He added: “I have known Lynsey since she was a little girl and even then it was apparent she was an exceptional character. I’m delighted Balfour+Manson has been able to support her to the point where she is now one of the finest young athletes in the country.

“We’re very grateful she spoke with our trainees because they clearly found it highly motivating, as did a number of our more senior staff! We are all willing her to further success.”

Another partner, David Flint, who takes a lead role in mentoring the firm’s trainees, added: “This was a most worthwhile session and there is no doubt our trainees benefitted greatly from meeting Lynsey and gaining an insight to the pressures she experiences in her daily life.

“Lynsey shows so many of the best qualities that any business would want to see in the young people joining its ranks. She is a very impressive and personable. We are very proud that our company has played a significant part in helping her fly the flag for Scotland in international competition.”

Lynsey, who won bronze in the 800m at the European Under-23 Championships in 2011, is training seven days a week in an effort to shave just three quarters of a second from her best time and so qualify for the 800m at the London Olympics.

Founded in 1888, Balfour+Manson now have a 130-strong staff led by 18 partners and 12 associates. With offices in both Edinburgh and Aberdeen, the firm is renowned for its excellence in litigation, private client work and commercial law. http://www.balfour-manson.co.uk/.