Media Release: And they’re off… Hamilton Park’s 18-fixture flat racing season off to a flyer on Sunday 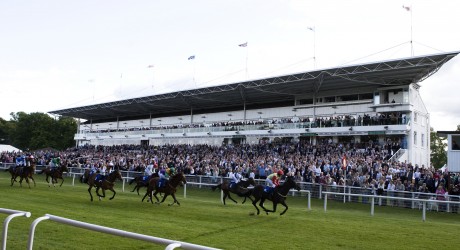 The Lanarkshire venue is describing its 2012 calendar as the “perfect package of racing and entertainment”, with the following just a few of the highlights this year:

The action-packed season gets underway this Sunday when gates open at 12.15pm. Cancer Research UK area volunteer manager, Rowan Main, will cut a ribbon to mark the start of the new season and there will be the traditional charity ‘dash’ run by Energie Fitness for Women, Hamilton, ahead of the first of seven races at 2.15pm.

As always, all under-16s accompanied by an adult can enjoy free entry.

The charity family race day has long been the season-opener for Hamilton Park, with £8,000 raised by racegoers since 2005 and Rowan Main is looking forward to another super Sunday at Hamilton Park.

She said: “There’s always a great buzz at Hamilton Park on the opening day and we’re really looking forward to this year’s fixture and raising more much-needed funds for Cancer Research UK.

“We receive no government funding for our research and we rely overwhelmingly on the public’s support.”

Hamilton Park chief executive, Vivien Kyles, added: “Our first meeting of the season is always a thrilling occasion and there is added excitement this year given the many highlights which lie ahead.

“At Hamilton Park we work all year round on a huge variety of events but there’s nothing to rival the buzz of a big meeting at the racecourse so Sunday can’t come soon enough.”

Following Sunday’s fixture, racegoers can enjoy new themed meeting Caribbean Night on May 11 or warm up for the Scottish Cup Final at William Hill Braveheart Night on May 18.

Ladies Night and Ladbrokes Lanark Silver Bell Racenight are the standouts in August, there are a host of family-themed fixtures in September before the season closes on October 1.

All of this is underpinned by Hamilton Park’s ongoing commitment to investing in racing, with total prizemoney for the season up to £752,000 – a ten per cent increase on 2011’s figures – to help encourage the UK’s top owners and trainers to send their best horses to Hamilton.

Kyles continued: “There is so much hard work and planning that goes into preparing for the new season that I’d like to thank all of the team here who have worked to do just that as well as our many sponsors who continue to support Hamilton Park.

“It’s now time for the most enjoyable part of the job – welcoming tens of thousands of racegoers, families and music fans through our gates and making these 20 events a real success and their days and nights out memorable ones.

“The 2012 fixture list has tremendous variety, combining some very strong racing with many different fun themes which will appeal to a wide audience.

“Of course, right in the heart of our season are the non-race day concerts featuring Tom Jones then Steps and Peter Andre which are our biggest yet and sure to be two of the best live music events in Scotland this summer. We can’t wait to get started.”

For further information on Hamilton Park or for tickets contact the racecourse on 01698 283 806 or visit www.hamilton-park.co.uk

Sunday’s race card is as follows: