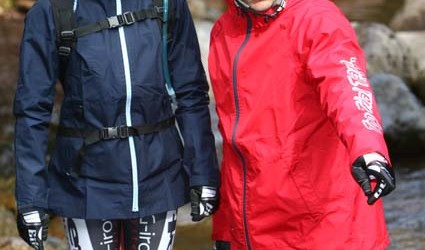 A YOUNG Italian couple share a passion for the SSDT.

Twenty-one year-old Sara Trentini (number 127) is one of only four women competing in the 2012 Scottish Six Days Trial (SSDT).

This week sees the attractive young Top Trials Team rider take on the biggest challenge of her professional career, but throughout she has been able to count on the support of her Italian boyfriend and team boss, Michele Bosi (number 126), who is competing in the SSDT for the sixth time this year.

Sara is no stranger to international trial events, having already competed at professional World-class level. Sara had her first taste of the SSDT in 2011 when she came along to watch boyfriend, Michele, who then encouraged her to enter this year.

The couple agreed that the SSDT, which is famous for being one of the toughest trials in the world, would be ideal preparation for the 2012 FIM Women’s World and European Trial Championships, in which Sara will also compete later this year.

Speaking on day two of the SSDT, Sara said that the event had proved to be a lot tougher than she had originally anticipated.

However, her objective was not simply to finish, but to finish with a good result.

Michele has been supporting Sara every step of the way, sharing his knowledge of the SSDT and also his experience as the professional minder of British 2012 FIM Trial World Championship contender, Jack Challoner (number 125), to guide Sara in her Scottish debut year.

The SSDT is a very physically demanding trial – six long days of riding through the Scottish Highlands in the wind and rain is certainly not most young couples’ idea of a romantic holiday.

Michele commented: “This week has been a true test of our relationship – as both Sara’s team manager and partner, I pushed her hard to come back here and ride this year.”

Sara added: “For sure it has not been easy, but I am having fun. It has been a great learning experience for me – I would not be able to get this level of training back in Italy. I will definitely be needing another holiday after this week is over though!”

But before the young couple can book their two weeks in the sun, they have four more days of their gruelling Scottish adventure to complete. This year’s remaining female riders include Britain’s Emma Bristow, Becky Cook and Katy Sunter.

The SSDT is organised by the Edinburgh & District Motor Club. EventScotland is continuing to support the event this year as part of its national funding programme. There are 275 competitors taking part in this year’s event between 7th and 12th May.

The SSDT is free for spectators to watch on all days. The official event programme, containing routes and spectating opportunities along with a range of interesting articles and additional information, is available to purchase in and around Fort William.

The annual Scottish Six Days Trial is managed by the Edinburgh and District Motor Club. It is a particularly challenging motorcycle trials event as it tests competitors’ stamina, endurance, strength and consistency over long distances, with 275 riders completing more than 100 miles and 30 sections on some days of the six-day event. The routes cover a combination of rough moorland, rocky tracks and public roads.