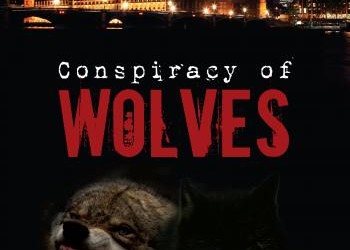 A RENFRESHIRE author who spends his spare time helping run a soup kitchen in Glasgow city centre is hoping an intriguing YouTube video will propel his latest thriller to a global audience.

“I used to take her out in the evenings on car runs down to the beautiful Firth of Clyde,” says Ernie.

“We’d park up and look at the stunning view, taking it all in. Then I’d think about these evil, black submarines in the water carrying warheads that could obliterate not just my village but everyone else’s as well. That’s what made me start writing.”

Nineteen years on, ‘Conspiracy of Wolves’ is Ernie’s second published book and is backed by an eerie clip on video sharing site YouTube which shows a world controlled by a secret committee of 300 people… and only one man is capable of standing against them.

That man is Douglas Hamilton who gets involved in a world of crimes, cover-ups and dodgy characters as he’s dragged deeper into the dark underbelly of the modern-day world. He must rely on his wits and savvy instinct to reclaim his wellbeing.

“I spent a year writing ‘Conspiracy of Wolves’, but initial feedback from the early drafts suggested I ‘find the chase and cut to it’, so I completely re-constructed the first 19 chapters to pack in more action.”

That took another six months of hard work but Ernie believes it’s been time well spent.

He does all his writing from a computer in his living room working from 1030am-1230pm and 7pm-10pm every day.

“Writing’s not about genius,” he says. “It’s about hard work. If you want to write a book you have to sit down and type. And in my writing I like to find the truths that no-one else is discussing and expose them.”

Sticking up for the oppressed and taking on the powerful are themes that run throughout Ernie’s work and his role as a trustee with the Emmaus Glasgow community has influenced this.

Ernie was a founder of the group back in 1997, which sees previously homeless people running their own business while recovering their own lives and helping others less fortunate than themselves.

“I turn 70 in February,” he says. “But my work with Emmaus has shown me how society misunderstands and judges certain groups of people.

“The poor and deprived are often assumed to be ‘bad’ but I’ve seen they’re often victims, controlled and dominated by others. I want to stand up for them through my writing.”

The publication of his second novel represents a triumph for Ernie who admits he was “hopeless” at spelling and grammar at school and has come in for stick from some who thought he’d never make it.

Ernie says: “Negativity is a bad part of Scottish culture and it applies particularly to families. We don’t want our relatives to get hurt or embarrassed. Often that’s because we care too much about what the neighbours would think.”

‘Conspiracy of Wolves’ is on sale now from Amazon priced £8 in paperback and £5 as a Kindle download. The promotional YouTube video can be seen at http://youtu.be/RaLpbhH8EYE.

Ernie Hasler is available for interview.