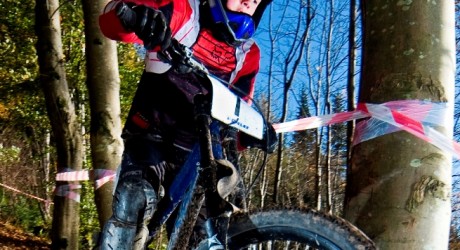 THE countdown is on to the iXS European Downhill Cup that returns to Innerleithen in the Scottish Borders from Thursday 15 to Sunday 17 June 2012 and entrants are being sought for two competitions that form part of the festivities.

The event, the only UK round-of-the-mountain bike downhill race series, will see the world’s best downhill riders pit their skills and speed against each other at the spiritual home of the UK downhill scene.

In the run up to the tournament, amateur filmmakers are being sought for the inaugural iXS Cup Innerleithen film night’s film competition while young riders between ten and 16 are being encouraged to enter the mini downhill.

With a fantastic prize fund of a Go Pro HD2 camera and SD card and a premier at the iXS Cup Innerleithen film night on Thursday 14 June, event organisers want amateur filmmakers to submit a three-minute film for their inaugural film competition.

The theme is ‘why you like biking at Innerleithen’ and there will be a special extra prize on offer if filmmakers include bagpipes in the film.

Filmmakers are asked to submit the film by 10 June for judging.

Already confirmed in the line up for the iXS Cup Innerleithen film night are the boundless talents of Joe Barnes and co in the Dudes of Hazzard and new material from the thriving Scottish bike filmmaking scene.

Tickets are available from i-Cycles on Traquair Road, Innerleithen, for £5 each.

Organisers are also staging a mini downhill on Saturday 16 June to be run alongside the main international race and they are keen for young riders to sign up now.

The mini downhill is a push-up downhill event for ages ten to 16 on a short course finishing in the iXS Downhill Cup event arena.

Riders push their bikes to the start of the course, line up when they get to the top and leave at 30-second intervals; as many runs as they have the energy for.

All the young riders need to take part is a well-serviced bike, a full face helmet, arm and leg cover, full-fingered gloves and a grown up to sign the registration.

A round up of the IXS European Downhill Cup Weekend Programme

The iXS European Downhill Cup festivities get underway on the Thursday (14 June) afternoon when the Olympic Torch passes through Innerleithen on the way to London and later that evening the inaugural iXS Cup Innerleithen Film Night will be staged at the Union Club on the High Street from 19.00. The winner of the film night competition will have their movie premiered on the night.

On Friday 15 June it is practice for all the riders and the Official iXS Cup Innerleithen launch party at the Traquair Arms, which starts at 20.00.

There is more practice and then seeding on Saturday 16 June. The mini downhill race for under-16s will be staged beside the main track. There is also the Fetish Bikes Dual Slalom in the main field from 16.00. This is a fun, but fiercely competitive event, open to all who have a bike, helmet and sense of humour. The regional Pipe Band Championships also takes place on Saturday afternoon and the massed pipes and drums will parade through Innerleithen at 17.00.

The riders get a bit of last minute practice in the morning then it’s race heads on for the big day from 12.30. This all takes place in the busy event village with trade stands, team pits, pump track, food stalls and a lot more.

For four days this summer, the eyes of the mountain bike world will be focused on the town of Innerleithen in the heart of the Tweed Valley, in the Scottish Borders.

From 14 to 17 June 2012 the iXS European Downhill Cup rolls into town for the only UK round of Europe’s premier downhill mountain bike race series. The world’s best male and female downhill racers will pit their skills against each other at the spiritual home of the UK downhill scene. A number of fringe events will keep spectators and riders entertained and there will even be an appearance by the Olympic Torch!

We are an Innerleithen based race team and event promoter with supported riders in many cycling disciplines. Our main supporter is i-Cycles bike shop (www.i-cycles.co.uk).  We are a ‘not for profit’ volunteer organisation with the aim to stage fun, friendly and challenging events for all disciplines of mountain biking. Over the last three years, we have organised the British Cross Country (XC) Championships, numerous XC and Multi-Stage Enduro races, a Mini DH race series for under 18s and the very successful iXS European Downhill Cup.

EventScotland is working to make Scotland one of the world’s leading event destinations.

By developing an exciting portfolio of sporting and cultural events EventScotland is helping to raise Scotland’s international profile and boost the economy by attracting more visitors.

More information and resources to help businesses engage with Year of Creative Scotland are available at: www.visitscotland.org/yearofcreativescotland-toolkit

BT Infinity is a new broadband product that uses the latest fibre optic technology to provide a much faster and more powerful internet connection.

BT Infinity offers download speeds of up to 300Mb a second, much faster than standard broadband delivered over copper wires. Note that as every phone line is different, the actual speed you get will vary.

BT is investing £2.5 billion on its fibre broadband programme throughout the UK. In 2011, Innerleithen was announced as one of the winners in the ‘Race to Infinity’ campaign following a successful community campaign.