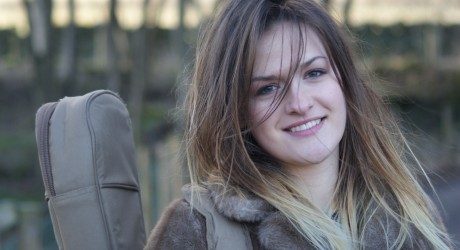 GEORGIA Gordon, a talented 17 year-old singer-songwriter from the Scottish Borders is to feature on the bill of Crank it Up, the flagship concert of the TweedLove Bike Festival programme at Peebles Burgh Hall on Saturday 2 June.

She will be supporting headliners Scottish indie band We Were Promised Jetpacks and a special one-off DJ set from the Tweed Valley’s very own Frightened Rabbit.

Georgia Gordon was chosen from around 50 applications from local bands and artists who applied to TweedLove’s search for a support band for their big finale gig,

She is looking forward to showcasing her talents at such a high-profile gig on her home turf.

Georgia Gordon said: “I’m really chuffed to support We Were Promised Jetpacks at the Tweedlove Festival Crank It Up gig, as I’ve been a fan of thm for a while.

“I’ve been influenced by a lot of things and people over the years, my main influences being KT Tunstall. Paolo Nutini, Angus and Julia Stone. I Blame Coco and Bombay Bicycle Club are also huge inspirations of mine.”

Over the last few years, Georgia has been playing gigs at various venues throughout the Borders and gathering a local following.

She now looks to have great prospects for success with her music, describing her songs as relatively light hearted but still meaningful.

They are a mix of acoustic/indie/folk influenced by her mood or the bands she’s listening to at that particular time.

TweedLove festival director, Neil Dalgleish, said: “It’s great to be able to include another local artist on the Crank It Up bill. Georgia is undoubtedly catching people’s attention with her unique voice and great songs.”

Georgia’s home, a few miles from Peebles in the Scottish Borders with its stunning surroundings, has played a part in fostering Georgia’s creative talent helping to shape her lyrics and tunes.

When Georgia was little she preferred being read poems to listening to stories. Piano lessons at age seven led to guitar lessons at 11.

Playing the guitar inspired her led to write songs at 13. She finally sang her own songs on stage at 15.

We Were Promised Jetpacks return from South By South West and a tour of America for a special appearance headlining the TweedLove bike festival concert, Crank It Up. Also featuring a special DJ set from the Tweed Valley’s very own Frightened Rabbit  and songs from local singer-songwriter Georgia Gordon.

The TweedLove Bike Festival, in association with Alpine Bikes, is believed to have the biggest and most comprehensive programme of events ever seen at an UK cycling festival; all being staged across the cycle friendly Tweed Valley in the Scottish Borders from Saturday 26 May to Tuesday 5 June 2012.

The extensive programme of free and paid events aims to reinforce the Tweed Valley’s reputation as the UK’s premier cycling destination.

Some major new events have been added to last year’s busy schedule of races, guided rides (both on and off road), and cultural events.

Many events are free, and the choice is wide and varied, with events for children, families and beginners, right through to cutting-edge races for expert riders on fat or skinny tyres.

Above all, TweedLove is about getting out there and having fun on a bike.

Headliners We Were Promised Jetpacks return from South By South West and a tour converting America to the pleasure of their sound for a special appearance for TweedLove.