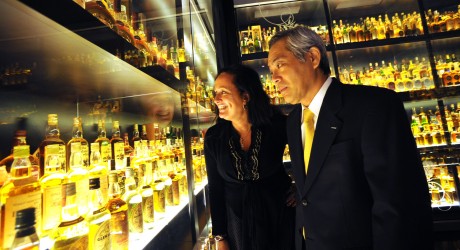 Comprising experts from Japan, Sweden, the USA, Scotland and Ireland, the world-class judging panel has gathered at Edinburgh’s Scotch Whisky Experience to blind taste and score 350 individual whiskies from distilleries across the globe.

As well as welcoming the connoisseurs to Scotland, Mr Ewing enjoyed an insight into the secrets of their alcohol alchemy and received some tips on the perfect way to saviour Scotland’s ‘national drink’.

The International Spirits Challenge is one of the most authoritative and influential spirits competitions in the world and has been hosted annually in London for the past 17 years, until now.

The panel is being chaired by John Ramsay, former Master Blender of Edrington Distillers for 18 years, with responsibility for the Famous Grouse and Cutty Sark blended whiskies.

Mr Ramsay said: “Having been involved with the International Spirits Challenge as a judge for 13 years and chair for the last four, it is with immense pride that we are able to bringing the judging of the whisky element home to Scotland for the first time.”

The competition will be hosted by the award-winning Edinburgh visitor attraction, the Scotch Whisky Experience. Visitors will be able to catch a glimpse of the connoisseurs at work, with judging streamed via a live webcam linked directly to the Whisky Shop.

Tourism Minister, Fergus Ewing, added: “I’m excited that this is the first time the International Spirits Challenge has been held outside London and it is great to be able to welcome the event to Edinburgh. Scotch whisky is an important part of Scottish culture and identity and has a wide role to play in attracting visitors from across the world.

“The whisky industry provides jobs and a welcome boost to the economy given that Whisky exports broke new records, increasing in value by 23 per cent to £4.23bn last year. This comes on the day when Diageo have announced an one billion pound investment in Scotland a huge vote of confidence in the industry, and a clear sign of the health and strength of the sector.”

Susan Morrison, director and general manager at The Scotch Whisky Experience, said: “We feel honoured and privileged to have been selected to host the first International Spirits Challenge event to take place outside of London.

“Scotland has fired whisky invention and creativity across the world, having developed thousands of individual Scotch whiskies and an industry worth £4.2bn, from an ancient process involving just three ingredients. It is perfectly fitting then that the whisky element of the challenge should come home to Scotland.”

World-class whisky blenders, Angela D’Orazio from Sweden and Seiichi Koshimizu from Japan, in the world’s largest collection of Scotch Whisky as they prepare to join fellow judges in the first International Spirits Challenge to be hosted in Scotland. The ten judges – from Scotland, Ireland, the US, Japan and Sweden – will blind taste 350 whiskies during the competition held at Edinburgh’s Scotch Whisky Experience.

MEDIA RELEASE posted by CM Porter Novelli. You too can post media releases (aka press release) on allmediascotland.com. For more information, email here.