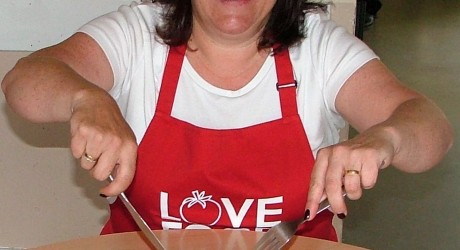 KAREN Gilligan wants to show people how they can be £430 a year better off – and help save the environment at the same time.

Begins a spokesperson: “As a volunteer co-ordinator for the Zero Waste Scotland campaign, her mission is to recruit an army of volunteers to mount a war on waste and spread the message about how important it is to reduce the amount of waste we produce.

“The campaign has now been launched in Renfrewshire and one of the messages going out is that households squander the equivalent of £430 a year on avoidable food waste.

“Karen and her volunteers will be getting out into the community to tell people how to Love Food Hate Waste giving tips and hints on recipes, portion planning, how to prolong the life of food and ways to use leftovers more effectively.

“Other areas they will be campaigning on to reduce waste includes Stop the Drop, which reveals ways to stop unwanted junk mail coming through the letterbox; how to make your own compost at home using a compost bin and Recycle for Scotland showing how we can recycle unwanted items through a wide range of existing services.”

Karen explains: “I’m on a mission to cut down waste, which will benefit both the public and the environment. But I won’t be doing this all on my own – I want to recruit around 30 volunteers who will be trained, given a basic uniform and given out-of-pocket expenses.

“We’ll be like an army of volunteers who will get out into our communities and show people how to cut down on the amount of waste they produce.

“We’ll engage with the general public and get the zero waste message out by attending events, speaking to groups and organising information stands.

“Over the next few months Kibble will be organising a series of events to publicise the zero waste message. We became involved in the campaign because of the success of our own award-winning recycling initiative, Project Oskar and the strong links we have with the local community.”

Karen continued: “The vision of the Zero Waste Scotland Volunteer Programme is to create a community based partnership of volunteers who work together to help communities make Scotland a genuinely zero waste society where all resources are valued and used responsibly.

“One of the most obvious areas of waste is the amount of food we throw away. The Government estimates that Scottish households throw away 566,000 tonnes of food waste every year. More than two-thirds of this could have been avoided if the food had been more effectively planned, stored and managed.

If you want to volunteer to help in the Zero Waste Scotland programme contact Karen by emailing karen.gilligan@kibble.org or calling 0141 889 0044.