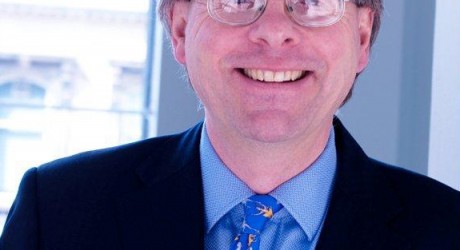 A CHARITY boss has shown his love of the great Scottish outdoors, as well as his dedication to the Scottish Community Foundation, by vowing to complete the challenge for an impressive fourteenth year in a row.

Tom Ward, chair of the Scottish Community Foundation, a donor services and grant making charity, first completed the challenge in 1999 and since then has raised over £70,000 for hundreds of charitable causes.

The 56 year-old is now set to raise a further £10,000 for the foundation during this year’s event, leading a team of four in a 54-mile trek across some of Scotland’s most rugged yet stunning scenery over 24 hours.

My Ward said: “I’m really looking forward to my 14th challenge in June, it’s at the point where it’s like Christmas and you’re waiting for this huge annual event to come around again.

“For me it ticks all the boxes on what a fundraising event should be – fun and challenging whilst giving you a great sense of achievement with it being all for such a great cause.

“A lot of people may not realise that it’s not just a physical challenge but also an emotional one because you need to have the determination to get to the end but once you do, the feeling is amazing.”

He first took part in the challenge after work colleagues asked him to support their teams which resulted in him joining them in the 54-mile hike and helping the teams raise a combined £10,000.

Mr Ward added: “I first started doing the challenge because it was a new goal for me to tackle and with it being a 54-mile trek through the West Highland Way in just 24 hours; it certainly wasn’t an easy one. I did a lot of mountain walking and climbing at school and college but had never done anything like it before.

“There’s such a fantastic camaraderie on the day, it’s tough but everyone is in the same boat and sets out to have a good time. You can’t go to that part of Scotland and not appreciate the stunning scenery whilst knowing you’re donating toward an extremely good cause – that’s what keeps me going back.

“It’s safe to say that I caught the bug and its even become something of a family tradition as my daughters have also been involved, either doing the walk itself or being part of the support team.”

Hailed as one of the major fixtures on the UK’s fundraising calendar, it has sealed its popularity by offering participants the chance to go through the country’s most challenging and breath-taking scenery whilst raising money for charity.

Mr Ward will join teams of dedicated fundraisers to complete the goal of conquering a 54-mile trek over Scotland’s stunning West Highland Way in just 24 hours – the equivalent of walking two marathons back to back while also climbing up Ben Nevis twice.

Since first taking part in 1999, Mr Ward has gradually became more involved in the Scottish Community Foundation and became chair of the fundraising events company in August 2011.

He explained: “By the time I did it for the tenth time I began to feel it was becoming a bit of an obsession and perhaps the sensible thing to do would be to stop whilst I was ahead and challenge myself to something else.

“But as it turned out I was asked to come on board as one of SCF’s directors. It gave me the opportunity to see how the funds were used and the difference they made to communities which was very inspiring.

“I’m now chairman and will continue to do the challenge because I believe that you can’t inspire other people to do the same whilst sitting down and most importantly I still massively enjoy taking part.

“I’m honoured to be part of a company and an event that continues to attract new and old participants who work so hard to raise donations for Scottish communities whilst giving them an experience they are unlikely to forget.”

Since its inception in 1996, the RBS Caledonian Challenge has attracted more than 14,000 participants who have raised over £11 million for The Scottish Community Foundation – which disperses grants to charities which have a lasting impact in communities across Scotland.

More information about the event and how to support participating teams can be found on the website: www.caledonianchallenge.com