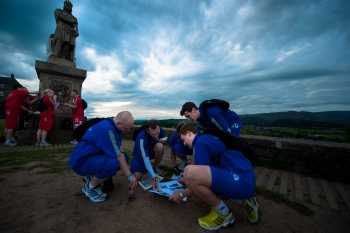 PARTICIPANTS in what is widely recognised as the UK’s largest and most prestigious inter-company competitive events, The Intelligent Sport® UK Challenge, set off last night from Stirling Castle in a blaze of glory.

The IMG Challenger World event, which is being hosted in Stirlingshire this week, is held annually in different locations each year and this year has around 50 participating teams from some of the Europe’s biggest companies and top management teams.

The challenge is also used as a powerful platform for charity fundraising, with the Dame Kelly Holmes Legacy Trust set to benefit from the partnership over the next three years.

Expectations are high and the corporate participants are expected to raise over £1million for the charity over the next three years helping to support young people, giving them access to world-class sports stars to inspire them and creating strong role models and life chances for young people.

Says a spokesperson: “The Intelligent Sport® UK Challenge is held just once a year and pushes the best UK business minds and bodies to their very limits over nine stages, four days and three nights.

“Based on three fundamental principles (strategy, intelligence and teamwork) corporate teams work through various missions that put to them to the test both mentally and physically.

“The event culminates this Saturday evening with an awards ceremony hosted by Olympic athlete and the charity’s founder, Dame Kelly Holmes, not to mention a well-deserved party.”

Julia Warne, IMG Challenger World said: “As well as presenting a unique networking opportunity with some of the UK’s biggest businesses, this event offers an unrivalled opportunity to develop your leadership and team development skills, all of which are vital in these testing times.

“The Intelligent Sport® UK Challenge has returned to the Scottish city of Stirling after four four years and with its rugged beauty, undulating terrains and historical setting we are so enthusiastic about being here.”

She continued: “We are also thrilled to be working with Dame Kelly Homes Legacy Trust.

“It has strong alignment with The Intelligent Sport® UK Challenge which is designed to support and inspire some of Europe’s top business teams to excellence and we firmly believe that participants will relish the challenge to contribute to the work of such a worthwhile charity.”

Dame Kelly Holmes commented: “I’m delighted my charity, the DKH Legacy Trust, is the official charity partner to the The Intelligent Sport® UK Challenge. The UK Challenge is all about teamwork, determination, learning how to overcome obstacles and still having the will to succeed.

“Through mentoring from world-class athletes, these are all qualities that my charity helps young people to develop so partnering this event and gaining support from some of the top businesses in the UK makes perfect sense.”

She went on to say: “I’ve loved getting involved and meeting the teams who have done so well to already raise nearly £100,000 for my charity, with more funds still to come.

“With the money raised by leading corporate companies competing in the UK Challenge, the charity will be able to create life chances for many more disadvantaged young people right across the country.”

Stirling Provost Cllr Mike Robbins said: “We’re delighted that the UK Challenge has chosen the Stirling area for the 2012 Challenge, and wish all the teams participating the best of luck.

“There’s no doubt that the route through the city streets, and our parks, mountains and forests, will really test them and at the same time show what a great outdoor destination this is.

“It’s been a great week for sport in Stirling, with thousands of local people and visitors lining the streets to cheer on the Olympic Torch relay, and it’s fitting that now we’re also welcoming Dame Kelly Holmes, a truly inspirational Olympian.”

The Intelligent Sport® UK Challenge will takes place in and around Stirling from 13th – 17th June.

The event will be televised for Channel 4.

For further information on the event please visit www.ukchallenge.co.uk