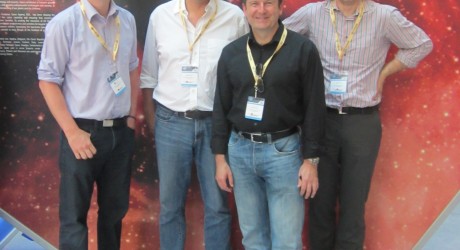 BATTLE snot, run in a giant hamster wheel, carry out keyhole surgery, race Usain Bolt, solve a murder and bust some moves at the DNA disco… just some of the things that visitors to Glasgow Science Centre will be able to do when the new BodyWorks exhibition opens next year.

After a judging process, all 115 of the immersive exhibits that will make up the new exhibition have been agreed and are being designed and built by exhibit fabrication contractor, Hüttinger GmbH & Co.

The BodyWorks project is of such a scale that Matthias Rudloff, project manager at Hüttinger, made a three-day trip to join the GSC judging panel where each exhibit was put through its paces in terms of high standards for fun, learning and hands-on interaction.

“We were looking for the wow factor! We had a big wish list but we needed to narrow it down and see what exhibits would make the final cut.

“During Matthias’ visit, we looked at individual exhibits to make sure that not only the interaction level and scientific requirements were met but also that it was good value.

“At the heart of every decision were our visitors – would they enjoy interacting with the exhibit, would it heighten their experience at the Centre and would they learn from it?

“We have high aspirations for the BodyWorks exhibition so we need to ensure that each individual exhibit works together to create maximum impact to our visitors – the wow factor, if you will.”

After all of the exhibits were agreed, the team had to then work on aspects such as safety, design, size and layout.

Every minute detail for each of the 115 exhibits had to be discussed and agreed from the sheer size and scale right down to the correct angle for the computer screens.

The BodyWorks development team will visit Hüttinger in September to see the first set of completed exhibits.

In a separate part of the development programme, the team is working with a number of world-class academics to develop the research pod section of the exhibition, liaising with several mums to be for the pregnancy diary exhibit and talking with lots of professional athletes with varying physiques for the Body Images exhibit.

Glasgow Science Centre will open the new £2 million BodyWorks exhibition in 2013, an unique and inspiring programme exploring the science underpinning health and wellbeing in the 21st century.

This immersive exhibition will fill the spacious 700 square metre third floor of GSC. BodyWorks is an exciting opportunity to showcase cutting-edge research and innovation in the health and wellbeing sector, as well as giving a platform for organisations involved in innovation to engage directly with its 350,000 annual visitors.

MEDIA RELEASE posted by Glasgow Science Centre. You too can post media releases (aka press releases) on allmediascotland.com. For more information, email here.