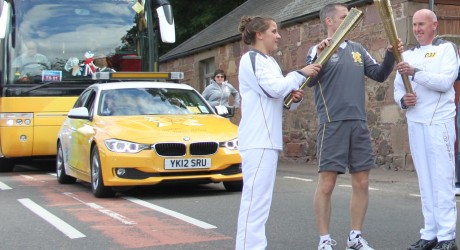 HERMES Datacomms’ Aberdeen-based sales executive Sam Murray is celebrating after playing his part in the Olympic torch’s historic journey around the UK.

Through many years of tireless work on UNICEF’s Aberdeen committee, Sam has helped raise over £100,000 towards tackling child poverty throughout the world, thanks to a wide range of projects including sending former NHS hospital beds to Africa.

Sam became involved in fundraising for UNICEF in 1985 when he joined Junior Chamber Aberdeen and became its representative on the local committee.

He was then elected chair of the local UNICEF committee a few years ago and was delighted to be nominated as one of the 8,000 Olympic torchbearers in recognition of his efforts.

Commenting on the experience, Sam said: “I was honoured and humbled to have been chosen to carry the torch.

“The public support for the relay has been immense and the personal good wishes I received from my colleagues and customers were overwhelming.

“It still hasn’t quite sunk in that I have been part of the 2012 Olympics!”